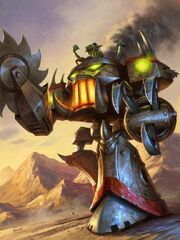 A shredder in Hearthstone.

A typical shredder in World of Warcraft. 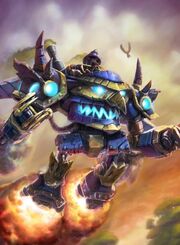 Goblin shredders were notably used in the Third War and Ashenvale war.

The Super Reaper 6000, seen in Stonetalon Mountains and around Venture Bay, may be an upgrade of the shredder.

During the Fourth War, a new type of shredders appeared, being empowered by Azerite.[7]

[Sky-Bo] has a chance to drop from

The shredder is an impressive goblin mechanical creature which is usually piloted by a goblin. Shredders are used for lumbering, but they can serve in war because of the solid metal construction of the machine and the great saws they wield. The first machine designed to mimic the humanoid form, goblin shredders use the steamsaws attached to their arms to cut down lumber at an incredible rate that is unmatched by peasant work crews. It moves at 10 miles per hour and has a crew of 1 usually designed for goblin-sized creatures, though larger version have been built).[8][9]

This invention allows a single goblin to do as much harvesting as ten field hands.[10]

Another goblin invention, called a "mechanical planter", does the opposite of the shredder; it plants new trees.