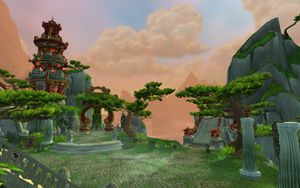 The Shrine of Fellowship can be found on a series of peaks in northwestern Jade Forest, providing a commanding view of the surrounding Path of Enlightenment, Thunderpaw Refuge, Forest Heart, and Tigers' Wood. Sam the Wise can be found here, as can Doji. Mei Li-Sa and her children Ty and Liu can also be found wandering between the shrine and Thunderpaw Refuge. The Shrine is extremely misty.

Finding the Shrine may be tricky, especially for Alliance players, whose quests never take them into that general area.

Follow the Path of Enlightenment (road marked on the map in the northwestern corner) south of Honeydew Village and the Strongarm Airstrip. To the east of the road, there will be stairs leading up; ascending them will change the subzone name to "Shrine of Fellowship". To get to the shrine proper, follow the winding path around the mountain, beginning to the right (south) of the stairs. There you will find the Broken Incense Burner required for the

The Shrine is generally a quiet and uneventful location. However, every so often a small event occurs. The event is begun by Sam the Wise, who normally inhabits the building at the western-most point of the Shrine, making a journey to the northwestern area where Doji is to be found. Once he reaches the area, Sam situates himself directly opposite Doji, and 6 male pandaren Challengers appear. These friendly NPCs appear near to Doji, and for a time are stationary. They then gather together into the exact center of the area, and begin... to dance. Because the 6 pandaren are all standing on the exact same spot, the visual effect is quite unusual. After a while, the Challengers split up and move around the area, briefly pausing to perform dance moves. The process is repeated as the Challengers gather together once more to dance in the center of the area, before again separating to travel around the area performing dance moves.

After repeating this sequence a number of times, Sam the Wise stirs and begins the walk back to his normal dwelling place. The moment he moves, all of the Challengers go into stealth, and move rapidly off in different directions as Sam crosses the area. The stealthed pandaren, still visible to the player (if sufficiently close), move erratically around the area for a time before disappearing, one by one.