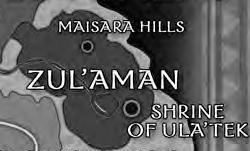 The Shrine of Ula'Tek seen in the Game Manual map.

The Shrine of Ula'Tek is a place in the southeastern part of Zul'Aman.[1]

The Shrine of Ula-Tek is the capital of the forest trolls in Zul'Aman, it is a massive ziggurat they hold sacred. The forest trolls rally around the edifice and their capital lies among its ruins. Crude troll huts mix with collapsed stone walls. This area is very heavily protected — far too heavily for most to gain entrance. Ula-Tek, apparently, is a serpent goddess, believed by some to be one of the Old Gods. The trolls worship Ula-Tek and hold the ziggurat in holy esteem, performing their dark rites and voodoo rituals among the ruins. The trolls keep their treasure — collected over centuries — within the ziggurat, which is another reason that they guard it so vigilantly.[2]

Ula'tek and the Amani's story from the RPG seems to have greatly been turned into Kith'ix's in Chronicle Volume 1. The Shrine may thus be Kith'ix's tomb, upon which Zul'Aman was built.