Shrine of the Dormant Flame 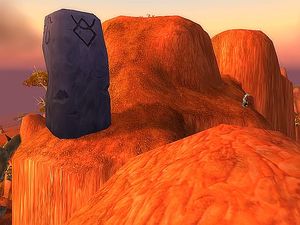 Shrine of the Dormant Flame

Shrine of the Dormant Flame is a place most holy to all shaman of the Horde. It is accessible via a secret path that spirals around the tallest mountain of the region, just northwest of the Valley of Trials. The top provides a fantastic view of the region, but jumping from the peak is ill-advised.

In order to reach the shrine, there is a path starting next to the Southfury River at the southwestern tip of the Southfury Watershed.

Telf Joolam is the keeper of the shrine, and wanders alone around it. In prior times, he was responsible for guiding aspiring shaman in the way of taming fire. The brazier at the top would be lit by shamans using the ember of a fire elemental they had defeated, to show that they had control over fire.