Not to be confused with Sha or Shu Blindeye. 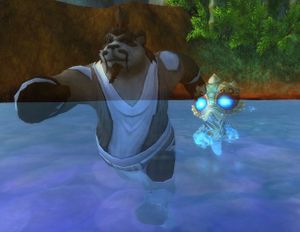 Vision of Young Liang and Shu.

Shu is the forever-young ancient spirit of water on the Wandering Isle. He can be found sulking in the Pool of Reflection because his best friend Liang is now too old to play with him. The elemental is fond of playing with people by launching them into the air with water.[1][2]

At least once he played with Li Li Stormstout. She had to run after him, but she lost his trail in Wu-Song Village.[3]

Shu is involved in the following quests: