Siamat, Lord of the South Wind, is the final boss in the Lost City of the Tol'vir.

To get to Siamat, all the previous bosses must be killed first.

He is a member of the Conclave of Wind.[1] He was sent by Al'Akir at the behest of Deathwing to the Neferset tol'vir to cure them of the Curse of Flesh in exchange for their loyalty. After becoming exhausted from converting the population of Neferset into their stoney bodies, the Neferset turned on him, trapping him within the tower at the center of their lost city. After slaying the leaders of the city, adventurers accidentally freed Siamat. He was then defeated within the crumbled ruins of the tower that imprisoned him.

Purging the Nerferset tol'vir's curse of flesh left the fearsome elemental Siamat severely drained. It was during this moment of vulnerability that the tol'vir struck and magically imprisoned Siamat at the center of their ancient sand-swept city. 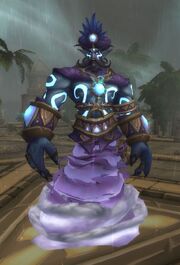 Siamat in World of Warcraft.

Stage One: Winds of the South, Rise!

Siamat begins the encounter flying above his platform, nigh invulnerable to any damage taken.

Stage Two: Cower Before the Storm!

After the players kill three Servants of Siamat, Stage two begins with Siamat landing on the platform and becoming vulnerable to damage.

Storm Clouds (with a white appearance) appear throughout the fight and slowly rotate around Siamat, dealing damage and knocking back any player below them. Everyone should watch for them and run from it if they see one come near.

In phase 1, Siamat takes only 10% damage and summons Minions and Servants.

The Minions of Siamat should be kited away from the group and killed by a designated DPS. They don't hit very hard. Hit them a couple of times to get aggro, then interrupt their spellcast. Kite them away from the group and kill them. It's good to kill them all in the same general area so the green storms that they drop are easy to avoid. The green storms do not expire.

The Servants of Siamat should be picked up by the tank, then killed. Move away when they die, since they will (after a two-second cast) apply the Lightning Charge debuff to everyone in melee range.

When the third Servant of Siamat is killed (the specific, third one that spawns), the fight will progress to phase two. Siamat will drop his shield and cause the players to bounce around for a while. Then he will attack the party with elemental attacks. This is the time to burn him down; ignore any adds. If you have controlled the fight by killing Minions away from the group, and avoided Lightning Charge, the damage taken will be manageable.

Intro
I. AM. UNLEASHED!

Aggro
Winds of the south, rise and come to your master's aid!

Killing a player
Nothing more than dust in the wind.

Siamat appears as a legendary card in the Saviors of Uldum expansion for Hearthstone. His effect allows the player to choose two abilities to give him, and his flavor text reads: "TAUNT. TAUNT."

He also appears as one of the bosses that can be encountered in the Tombs of Terror adventure.

How To: Siamat - Heroic Lost City of the Tol'vir