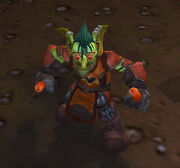 The Horde got the bright idea to send Bilgewater goblins to attack our quarry.

Kill the Bilgewater goblins until you find an explosive, plant it on one of the demolishers... and BOOM! Siege ended.

We need you to take out those demolishers, soldier!

You really showed them who owns this beach, <name>. Good work!

Pick up the other dailies at Lion's Landing before heading out.

[Bilgewater Blasting Cap] drops. It will most likely take handful of kills, though the goblins only have a Throw Dynamite move which hits for a mediocre amount of damage. Don't worry about the Shieldwall Excavationbots -- if they don't get attacked, they won't aggro.

Blasting Cap gathered, head southwest to Sparkrocket Outpost, kill a path to one of the Domination Point Demolishers, and interact with it to destroy it. They have 8 million health -- don't bother attacking them normally.