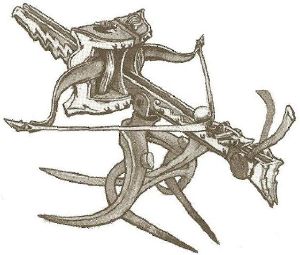 Siege crossbows are scaled-up versions of the man-sized weapons, mounted on table-like support structures and designed to throw heavy iron bolts incredible distances. Even the smallest siege crossbow has a bowspan of nine feet, and requires multiple soldiers to cock and load.[1]

A two-man crew can operate a siege crossbow, hauling the weapon into position with horses and then anchoring it in place.[1] 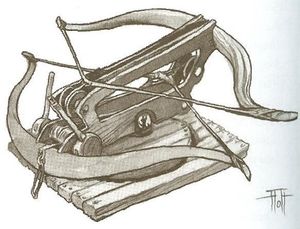 Triple siege crossbows are so large and difficult to move that they are usually only used for the defense of fortifications. With two forward facing bows and a third opposed, they can hurl bolts with tremendous force. At the Battle of the Violet Citadel, an Alliance crew manning a triple siege crossbow killed an abomination that was almost a half-mile away.[1]