This article is about the raid instance. For the lore of the battle, see Siege of Orgrimmar. For the patch, see patch 5.4.0.

The Siege of Orgrimmar is a raid instance released in patch 5.4, consisting of two major stages. The first stage focuses on dealing with the aftermath of the Sha contamination of the Vale of Eternal Blossoms caused by Garrosh Hellscream's revival of the Heart of Y'Shaarj, and a confrontation with the last Sha prime that has manifested inside the Vault of Y'Shaarj, the Sha of Pride. The second stage focuses on the fight in Durotar, where the Darkspear Rebellion and the Alliance army make a final push to the Horde capital city, Orgrimmar, in order to take down the Horde Warchief Garrosh Hellscream and put an end to the Alliance-Horde war, as well as Hellscream's intent to take over the world of Azeroth by force.

This is the first raid to implement the Flexible Raid system, which allow groups of anywhere between 10 and 30 players to raid the instance. Flexible raid was originally its own difficulty between Raid Finder and normal (now called heroic). With the release of patch 6.0, the difficulties were renamed and scaled to match the new standard.

The Raid Finder version (and the original flexible version) of the Siege of Orgrimmar is divided into 4 different wings, with each wing originally opening a week (or two) after the previous. See the list of opening dates for details.

As of March 18 2014 (or later in the week for non-US regions), Siege of Orgrimmar is now able to be raided cross-realm with BattleTag or Real ID friends.[1]

Difficulties are listed as they were called prior to the launch of patch 6.0.

Heroes of the Alliance and the Horde have tested their mettle against the might of the sha, the Thunder King, and each other, but neither side could have predicted the boundless atrocities the Horde's warchief would commit.

Garrosh Hellscream's reckless thirst for power has led him to do the unthinkable: from beneath the Vale of Eternal Blossoms, he has seized the desiccated heart of an Old God to use as a tool of war, unleashing horrors upon the sacred valley. The brazen warchief has also turned against other members of the Horde to create a purely orcish force of his own. Now this "true Horde" is amassing strength within Orgrimmar's iron ramparts. With Garrosh bent on total victory, he plans to demonstrate the potency of the true Horde by conquering not just the Alliance but the whole of Azeroth.

It is up to you to purify the vale and bring Garrosh to justice. Should you fail, the frenzied legions of his true Horde will raze all you have ever known and mutate Azeroth into a hellish new Outland.

The tensions stoked by Garrosh Hellscream's arrogance have reached a boiling point with the destruction unleashed upon the Vale of Eternal Blossoms. Leaders of the Alliance and Horde lay siege to Hellscream's capital in order to topple the ruthless Warchief once and for all!

Venture through the scarred Vale of Eternal Blossoms, exploring unearthed mogu ruins to discover the source of the destruction.

War has come to the gates of Orgrimmar, as Alliance forces and the Darkspear Rebellion seek revenge against Garrosh Hellscream.

Within a secret Kor'kron base carved into the sweltering caverns beneath Orgrimmar, Garrosh is assembling his ultimate army.

Wielding the dark power that lay dormant beneath Pandaria, Garrosh seeks to bring a new order to Azeroth. He must be stopped! 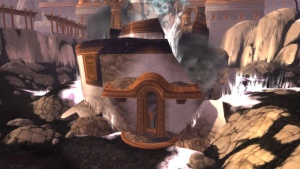 Instance entrance area at past time at Vale of Eternal Blossom 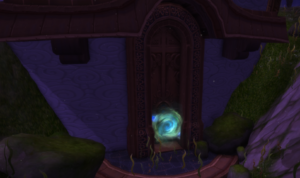 The actual instance entrance is located at the bottom of what was the central lake at [74, 42]

in the Summer Fields of the Vale of Eternal Blossoms. A meeting stone is situated outside, next to The Emperor's Burden - Part 8 at [69, 45]

at the southwestern end of what was the lake.

In the level 120 phase of the Vale introduced by patch 8.3.0, the Siege of Orgrimmar portal is located underwater at the same coordinates.

In addition to the loot in the tables below, the first eight bosses (Immerseus to General Nazgrim) have a chance to drop a

[Secrets of the Empire], or

[Titan Runestone] for players on the appropriate step in the legendary questline.

WoW Insider had the opportunity to chat with Lead Game Designer Tom Chilton regarding the Siege of Orgrimmar:

The Siege of Orgrimmar marks the first time we've seen an endgame raid on a capital city. What were some of the challenges of putting that raid together?

Certainly some of the biggest challenges were that Orgrimmar as a layout was never really designed to be somewhere that people fight -- same case with Stormwind or Undercity or anywhere else. We architected those way back ten years ago, there's not really a whole lot of thought that went into the layout as a raid zone.

I think with a raid in Stormwind, I'd spend most of my time falling in the canal.

(laughs) Yeah, no doubt. So there were really two big challenges -- one of them was that the layout wasn't designed for raiding. And then the second challenge was that we wanted players to feel like they were sieging a capital city, yet at the same time we know that players want to experience new content. If the whole thing were literally just a romp around Orgrimmar, it would feel like, you know we hear a lot of that "Oh Blizzard's just lazy, they just wanted to re-hash content, they didn't want to give us new stuff, blah blah blah" -- all that kind of stuff.

So we knew that -- and to be fair, players do want to see new stuff right, they want to see new environments, they want to be inspired by locations. It's really cool to have that epic dungeon crawl feeling in a raid. So we wanted to make sure we delivered on both of those fantasies -- both the raiding of Orgrimmar itself, and then also delivering a new section that they have never seen before, that felt really epic and awe-inspiring.[2]

Icy Veins Encounter guides for the Siege of Orgrimmar
Retrieved from "https://wow.gamepedia.com/index.php?title=Siege_of_Orgrimmar_(instance)&oldid=5688432"
Categories: