For other vehicles not used in PvP, see vehicles.

Siege weapons, also known as siege vehicles, are drivable vehicles using the vehicle mechanic that are used by players in PvP environments to raze destructible buildings and attack players. They were added in World of Warcraft: Wrath of the Lich King. 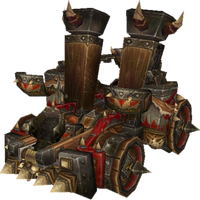 This vehicle is much quicker than the Demolisher, with faster acceleration and quicker turning speed, but it doesn't have as long a range as the Demolisher and doesn't do quite as much damage. It also carries no passengers, but has a frontal flame attack. This is the lowest cost vehicle available.

This is the baseline vehicle upon which the rest are based. It has both short and long-range attacks and a ram attack. The vehicle can also carry up to 3 passengers as well as a driver. In this vehicle the passengers are exposed, allowing them to be targeted and attacked -- but also allowing them to do the same. The driver is also in control of both weapons.

The hardest hitting and longest range vehicle of all, it carries a driver, gunner, and passengers. Unlike the Demolisher, the passengers are not exposed. The driver controls only a frontal ram attack, while the gunner is control of a fully mobile turret.

From the beginning of World of Warcraft, most races had (and still have) one or more types of nonfunctioning siege weapons stationed throughout their territories. It is unknown if these were an early stage of siege vehicle development that became decorations, or just decorations from the beginning.

Initially (on a very early version of the community site's PvP page) it was said that "Something long-term we want to add to battlegrounds to make them even more fun are siege vehicles. We'll begin implementing them after WoW ships, but the intention is to give players catapults and other siege vehicles, and then increase the challenge when it comes to razing the opposing side's town. Once siege vehicles are in, the mechanism for conquering the other side will be to destroy their buildings and not just to kill their NPCs."[1][2] Concept art was shown on the page of a "Battleground Concept" that was seemingly a siege battleground, and an "Orc Demolisher PvP Vehicle" that was fully rendered but never used in the game.

In previews of WotLK, it was said there were originally going to be "different siege weapons for different races".[3] This hints at more types than were added, though the current types do not invalidate this.

The first two may be early concepts of the Forsaken catapult, while the ballista may be just a basic example, although some ballistae did become mobs.

Flying machines, Bombers, and Shredders were initially going to be added to Wintergrasp, but air/anti-air combat in the zone was cut.[6]