For the wolf in Tanaan Jungle, see Sif (wolf). 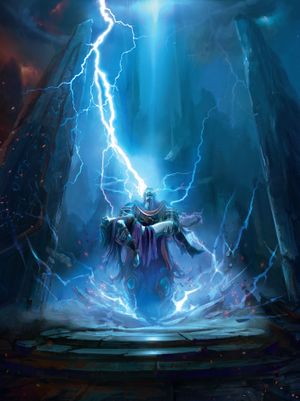 Thorim discovers the body of Sif.

Sif was a vrykul woman and the wife of Keeper Thorim. She was murdered by Loken, who then tricked him into believing that it had been the work of Arngrim, the king of the frost giants. This caused Thorim to turn against his giant allies, and later lapse into a long depression.

Although Sif was the wife of Thorim, she had an affair with Thorim's brother Loken. Yogg-Saron, from his prison within Ulduar, muddled Loken's thoughts and made him lash out at Sif, scared at the thought of losing her, and he killed her by accident. Horrified at what he had done but too scared to tell Thorim the truth, Loken tricked Thorim into believing that it had been the work of Arngrim, the king of the frost giants, turning Thorim against his allies. Loken would stop the war between Thorim's and Arngrim's forces with an army he had created with the Forge of Wills, but unknown to Loken Yogg-Saron had planted the curse of flesh inside the forge, which would slowly convert titan-forged into flesh and could also spread to those forged before the curse was created.[1]

Thousands of years later, within the Ulduar raid, Yogg-Saron continues to impersonate Sif and uses her to keep Thorim subdued. Thorim's hard mode requires that he be defeated in her presence, where she attacks the raid with heavy frost damage spells. After the players break Thorim of his nightmarish controlled state, Sif transforms into a tentacle of Yogg-Saron and disperses through the ground.

Sif will cast spells that hit targets for high amounts of frost damage, she will also teleport around the arena into random spots, she cannot be damaged or targeted and is considered an obstacle for the raid encounter.

Intro
Thorim, my lord, why else would these invaders have come into your sanctum but to slay you? They must be stopped!

Missed Hard Mode
These pathetic mortals are harmless, beneath my station. Dispose of them!

The first half of Hyldnir territory is called Sifreldar Village, which could possibly be named after her. She also might've been a Hyldnir vrykul.