Signs Of The Times (Horde)

For the Alliance quest, see

We've got to do something to reduce interest in this doomsday cult, but I'm hesitant to take much action until we know more about who is behind this group.

I've had my men place markers around heavily traveled areas in Orgrimmar. Take these posters and set them up where you see the markers. They won't discourage the most determined of seekers, but it's a first step in exposing this cult. The Horde has enough to deal with as it is, without people willfully spreading lies too.

Did you put up those warning posters?

The player places the following posters at the marked spots in Orgrimmar:

Citizens of Orgrimmar, beware the soothsayers and prophets of doom that have taken over our streets. Do not be taken in by their mad raving. They only want to weaken us in the face of our true enemies!

An Orgrimmar Citizen then appears and reacts to the poster:

Well done, <name>. Now we must focus our efforts on discovering more about this cult and freeing the people they've conned into joining. 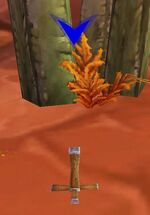 One of the markers located around the city.

Markers with blue arrows pointing over them can be found all over Orgrimmar except the Cleft of Shadow, Valley of Spirits and Valley of Wisdom.