Not to be confused with Silgryn.

[Scrolls of the Faldrottin] described a Valkyra prophecy about a new vrykul ruler, one who could unite the clans once more and turn the Tideskorn against the Burning Legion.[1]

Sigryn used to live in Stormheim, but her last moments there were spent escaping the clutches of assassins sent to murder her family. She would never forget the night they came. Her mother fell before her eyes, and they descended on her brother before she managed to escape. After that night, she was alone, and believed to be the last of her bloodline.[2] 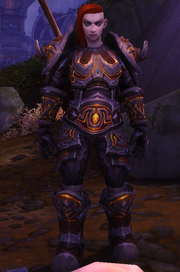 Since the fall of Skovald, the outcast vrykul town of Jandvik saw many new faces arrive. In their midst was a wandering shieldmaiden who had come through recently, and who set up camp outside of town, to the northeast. She stayed only long enough to purchase supplies and avoided all eye contact while she was here.[1] She was in fact secretly the heir of the late God-King, Sigryn. Found by an adventurer, she was convinced to follow through this prophecy. While she did not believe in it, she felt compelled to undo the damage her father wrought on the Tideskorn. The two met in Valdisdall, from where they would make their way to Skold-Ashil and request an audience with the val'kyr Eyir, in the hopes that she could shed some light on this prophecy.[2]

The journey was not an easy one however. Being the daughter of Skovald had won Sigryn many enemies. As she expected, the two were repeatedly attacked by assassins on their way to Skold-Ashil. Escaping her past was too much to hope for. Entering the Valkyra city, Sigryn recalled stories her mother told her as a girl about this place and its mighty shieldmaidens. It was as grand as she described it. Oddly, the armor these women wore also reminded her of her mother's. They arrived at the Vault of Eyir, where Priestess Halla recognized Sigryn's face and identified her as the child of prophecy, bringing her inside to Eyir. At last the blood of Skovald had returned to the Valkyra. Eyir explained. Long ago, she foresaw the Valkyra uniting the Tideskorn against a terrible foe. At its head would stand a descendant of God-King and Shieldmaiden. As a child of Skovald, Sigryn held a claim to his throne. Any who disputed her right to rule had to be made to bend the knee. Were she to fail, the Tideskorn would splinter, leaving nothing to stop the Legion from overtaking Stormheim. Sigryn, feeling the great burden being put on her shoulders, replied that she could not turn her back on the Tideskorn. She would become Eyir's instrument.[2] 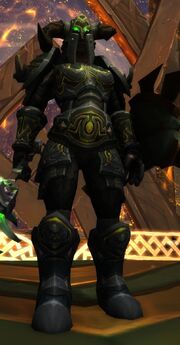 Sigryn consumed by the fel

Eyir told her that her claim to the throne would be disputed by two rivals, Runeseer Faljar of the Bonespeakers and Jarl Velbrand of the Drekirjar. Eyir suggested she began in Haustvald with the Runeseer. Indeed, he was a close ally of Skovald and a powerful mystic. With the Bonespeakers at his charge, he would prove a staunch opponent if he couldn't be made to yield. Sigryn and her companion thus rode to Haustvald and challenged Faljar for the rule of the Tideskorn. After losing the fight, the Bonespeakers yielded, their clan would not interfere with Sigryn's claim to the throne. Before leaving, Faljar told Sigryn that he sensed the same darkness that consumed Skovald dwelling in the girl's heart. How she had resisted it this far, he did not know.[3]

The Runeseer's words troubled her. She wondered if the darkness he spoke of, Skovald's fel curse, could have passed onto her somehow. Still, they travelled to Hrydshal where she proved her strength to Jarl Velbrand by defeating him. The Drekirjar would back her claim to the throne, but there was another rival who would cause greater concern, one who lived in secret. The Jarl revealed to Sigryn that the God-King's son, her brother, still lived. His riders had spotted him among the outcasts of Vrekt. He would be the true heir to Skovald's throne, the vrykul would never follow Sigryn were he to contend her claim.[4]

Sigryn was in shock. Her brother lived. The last time she saw him, the assassins were closing in on him. She couldn't imagine how he defeated them. Wasting no time, they travelled to Vrekt. There, they found Torvald. He welcomed her coldly, telling her that it had been a long time since she left him for dead. Sigryn replied that she did not want to leave him, she just was not strong enough. Torvald then explained the way he had survived the assassins. He had embraced the "gift" their father had left them, the one Sigryn and their mother had so vehemently denied. He had succumbed to the fel, but Sigryn did not understand how. She did not remember their father feeding them the fel. The sickness it caused in her must have clouded her mind. Something in their blood made them resist its influence, but it remained within. All Sigryn needed to do was to give in, he said. But she would never be a tool for the Legion. Standing up, Torvald ignited his blade with felfire. Sigryn could not allow the Legion to corrupt the vrykul. The two clashed. Torvald's last words were few, but troubling. He suggested that she should ask her masters who had sent the assassins for them that night, so long ago. Fate was cruel with Sigryn, she had found her brother alive, only to see him fall by her own blade.[5]

What was done, was done. There were none left to challenge the throne of the Tideskorn. Her brother's words still haunted Sigryn, however. If Eyir knew who ordered her family killed, then she would hear it from her before accepting the crown. Eyir knew no good could come out of this, but Sigryn insisted. The val'kyr thus revealed that it was Odyn himself who had ordered Skovald's family killed. He feared that the God-King's heirs would offer the Tideskorn into the hands of the Legion, and decreed that the lineage of Skovald be ended, in blood. Sigryn was shocked. Overwhelmed with anger, fel energies started to radiate from her. She declared that the titan watchers had no more honor than the Legion. Succumbing to her fel powers, wings sprouted from her back. As she left, she claimed that she would tear down the Halls of Valor herself and show Odyn what true fear is.[6]

Sigryn had taken the path of Skovald before her. Only, Eyir feared she was more powerful than her father ever was. But Sigryn's thirst for revenge would lead to her undoing, for though she was truly powerful, she would be no match for Odyn. She had to be stopped before she could confront Odyn, before it was too late. Eyir said that Odyn would close the Gates of Valor as soon as he became aware of Sigryn's assault, and that the champion would have to find another way in. The val'kyr had no talent with portals, but the Kirin Tor was very adept. Archmage Khadgar thus worked on a way to get the hero into the Halls of Valor and pursue Sigryn.[7]

As the hero arrived, corpses of Valarjar lay on the group. In the Great Mead Hall, Sigryn, Jarl Velbrand and Runeseer Faljar were barging down the great door. Refusing Sigryn's offer to leave the halls alive in honor of their friendship, a long battle ensued. Sigryn eventually came to her senses however, and expelled the fel corruption from her body.[8] She went to the Vault of Eyir, asking for the val'kyr's forgiveness, and a fitting punishment. Despite her misgivings, Sigryn was the only vrykul to possess the strength and will to overcome the fel, something no vrykul had ever done before. As such, Eyir decided that, instead, she was to assume the burden of the crown, and rule the Tideskorn as their God-Queen.[9]