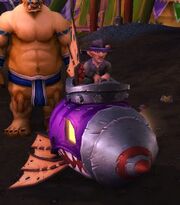 “We may dress differently... or seem odd... but we're really just like everyone else. We value the same things you do... money, happiness, family... Yes, we're a family. We're a family that, like every other rube family out there, takes care of our own. We just do it our own way.”

— Silas to Cedrick Fallrook, shortly before locking him inside a coffin and burying Cedrick alive.

Silas Darkmoon is the founder and leader of the Darkmoon Faire, an exotic bunch of wandering showmen, who together celebrate the wondrous and mysterious idiosyncrasies found in Azeroth. Previously operating in Mulgore and Elwynn Forest, his Faire has since the time of Deathwing's fall moved to Darkmoon Island.

At some point Silas and his crew visited Southshore for performance.

When Kerri Hicks was wrongfully accused by Cedrick Fallrook of his brother Erik Fallrook's murder, Silas and the rest of the Darkmoon Faire worked together to prove her innocence. When it became impossible for them to do so in time to prevent Kerri's execution, they opted instead for breaking her out of jail. Though successful, they were caught before they could escape. Luckily, it was revealed that Yebb Neblegear had found a witness that proved Kerri's innocence, and Kerri and the rest of the Darkmoon Faire were free to go.

Later on, Silas and the rest of the Faire would abduct the murderer Cedrick from his home after he had been banished by his father, enforcing their own brand of justice by stuffing Cedrick inside his brother's coffin and burying him alive. Silas would not stand for violence on his fairegrounds, but nor would he forgive slights against his "family of freaks".[2]

Amaze at the wonders that the Darkmoon Faire has uncovered in this vast and mysterious world! We have spared no expense in bringing you excitement that children of all ages will delight in!

We have it all... delicious food, strong drink, exotic artifacts, fortunes read, amazing prizes and excitement without end!

And, don't forget to turn in your Darkmoon Faire Prize Tickets! All it takes is five or more and you're on your way to the most wondrous prizes on all of Azeroth. Everybody is a winner! (from http://www.worldofwarcraft.com)

"Greetings, my friend…I want to welcome you to the greatest show on Azeroth!" [3]

Please, step right up and take in all we have to offer. Ride the rides and see the sights! Amaze at the wonders that the Darkmoon Faire has uncovered in this vast and mysterious world! We have spared no expense in bringing you excitement that children of all ages will delight in!

Silas Darkmoon appears as a legendary card in the Madness at the Darkmoon Faire expansion for Hearthstone. His effect rotates the minions on board in a direction chosen by the player.