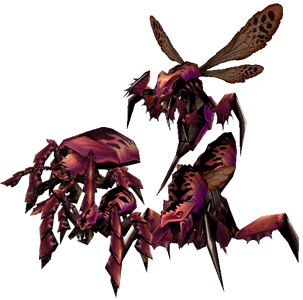 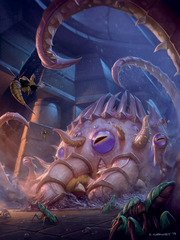 The silithid are an insectoid race created by C'Thun and found primarily in Kalimdor. Unlike the qiraji, the silithid are non-sentient, though they remain dangerous foes.[1]

The silithid were created from the qiraji by the Old God C'Thun.[2] The qiraji, in turn were an evolution of the aqir race that had been spawned by the Old Gods in the days of the Black Empire and then forced to hide in Ahn'Qiraj after the Aqir and Troll War.[3]

Silithid can range in size from a normal insect to gigantic. Size seems to depend on how long the silithid are allowed to develop in their egg stage. It appears that size is also directly correlated with colony size.[4]

Some castes of the silithid.

In the wake of the Shattering, a submerged colony of silthid can be found at the Sunken Dig Site, suggesting they are capable of living underwater for long periods or indefinitely. In addition, a silthid with a protruding brain-type feature, Hive Controller can be found here.

Although many varieties of Qiraji Battle Tank can still be found in the ruins of Ahn'Qiraj today, the darkest of the species were only seen on the day the Scarab Gong was rung.[5]

Silithid hatchlings entertain themselves by clacking their mandibles together in increasingly complex rhythms.[6]

No creature yet encountered can adapt to changes in the environment as quickly as the silithid. The larvae, or broodlings as they are often called, can evolve into a variety of silithid creature types based on the needs of the hive.[7]

Research conducted by Tammy Tinkspinner revealed that after Sargeras impaled Silithus with his sword, the silithid became riled up and stronger than ever due to feeding on Azeroth's blood.[8]

Their society is divided into several castes, and each caste has a unique physical type, ranging in size from fairly small wasps to huge silithid colossi. Every caste has its function withing their massive underground hives which consist primarily of circuitous tunnels providing living space, as well as protection for their vulnerable eggs and larvae. Though not all silithid are innately hostile, all fiercely defend their hives when threatened.[1]

There are a few silithid (Hive'Zara Tail Lashers, Vekniss Hive Crawlers and Qiraji Scorpions) that use the scorpid model; it's unclear if these are another caste of silithid, such as the Silithid Swarmer, or something else. 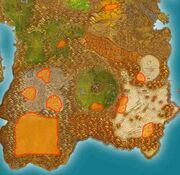 The silithid burrow their underground hives all over southern Kalimdor. All of Silithus is under their control, and they have hives in Feralas, Tanaris, Un'Goro Crater, and the Shimmering Flats. They've even been sighted in small numbers in The Barrens. Most of these locations are deprived of water, and silithid have been spotted at water posts in Tanaris. Perhaps their survival or nutrition relies heavily on water.

Each of the three hives in Silithus has a crystalline prism in it. They are apparently a means for the qiraji and other unknown entities to communicate various messages to the silithid.[9]

Qiraji battle tank mounts rare drops in the Temple of Ahn'Qiraj. They come in several colors:

[Yellow Qiraji Resonating Crystal] and can only be used inside the instance.

There is also a Black Qiraji Battle Tank, but it was possible to obtain one only during the Gates of Ahn'Qiraj event. It is usable outside the instances, thus rare sightings of these mounts outside Ahn'Qiraj are possible.

Silithid are tamable by hunters as part of several different families, differing based on caste.

Silithid are an intelligent insectoid race that have grown in strength and power in recent years. They first appeared in the region called Silithus, but have since founded colonies in neighboring areas, usually far from native settlements. They sometimes prove impartial to travelers, but defend their territory ferociously from invaders.[12]

Scholars disagree on the origins of the silithid. Some believe they are an offshoot of the arachnoid Nerubians, an insect race that mostly dwells in the northern regions of Azeroth. Others believe they are a new race heretofore unknown on Azeroth, possibly having arrived from another world elsewhere in the Twisting Nether, much as the orcs once did. Still others posit that they are servants of the qiraji, and that their presence in Southern Kalimdor is a harbinger of the qiraji invasion.[12]

To a humanoid's eyes, silithid are enormous bugs, most of man-size or larger, with powerful natural weapons at their disposal. The silithid build structures out of natural materials using their bodily secretions. Silithid hives are immense, alien affairs with towering antenna-like spires jutting out of the earth. In the maze of tunnels below, the creatures raise their young, tend to their wounded, manage food storage, and fend off invaders.[12]

Silithid are capable of communicating by touching antennae to one another. They can also send simple messages to larger groups by sending out chemical signals in the air. Individual silithid possess a certain level of animal cunning, but are unintelligent. They exist to serve the hive, and are specialized in their roles. Wasps attack, tunnelers dig, reavers defend, swarmers train, queens lay eggs, and so on. A silithid instinctively gives its life for the colony.[12]

Most scholars agree that a silithid begins life by hatching from an egg. At this point the young silithid is a broodling — a larval state as yet unspecialized for any role in the hive. Eventually, the broodling encases itself in a cocoon and changes into its new form — a wasp, reaver, swarmer, or possibly some other as-yet unknown type of silithid. While silithid haven’t been a visible part of the world long enough for anyone to accurately gauge their lifespans, some researchers think that after achieving adulthood, a common silithid can live for up to 5 years, although queens can survive for decades.[12]

Some believe the silithid's insect-like appearance is derived from the movie Starship Troopers (1997), where a group of insectoids do battle with humans in space. Similar suggestions have been put forth about the Zerg from Blizzard's Starcraft series. Blizzard has also claimed that they derived some inspiration from Starship Troopers for Starcraft (most likely the book given that the movie and Starcraft were in production at the same time). However, it has also been suggested that both Warcraft and Starcraft were derived from the Warhammer and Warhammer 40k franchises (which are themselves derived from Lord of the Rings and Starship Troopers respectively), making the tyranids another potential source for inspiration.

The silithid hives show similarities to the works of surrealist artist H.R. Giger, possibly being inspired by his work.