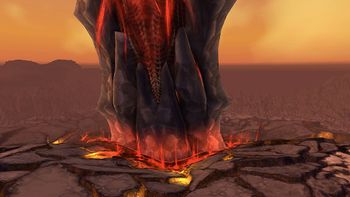 Silithus: The Wound, also known as the Wound in the World,[1] is the name given to Silithus after the dark titan plunged his sword into Kalimdor. The wake of destruction now covers the majority of the desert. Zidormi and Rhonormu make it possible to switch between old Silithus and the Wound.

The impact of the sword has caused the ground around it to always be hot.[2] Several cultists and insects still remain in the ruins.[2] 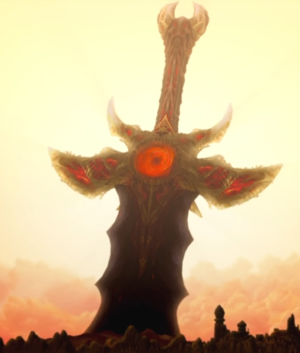 The wound was formed when Sargeras destroyed the region by plunging his sword into Azeroth, damaging the titanic world-soul of the planet. Almost immediately after the wounding, Bilgewater Cartel goblins started mining Azerite,[3] and SI:7 scouts were sent to investigate.

Darnassus' response to the destruction was sending Cenarion Circle druids and priestesses from the Sisterhood of Elune and building moonwells[4] to heal the area. They found an Azerite vein and sent the substance back to Darnassus. Malfurion Stormrage reported that everyone in the Cenarion Hold as well as throughout the region were killed.[5] Despite this, several cultists are still present in the desert. Hamuul Runetotem also suggested to the Horde leaders to build a new Cenarion Hold.

Some time later, champions from the Alliance and the Horde sacrificed the power of their artifacts to draw out the corruptive energies of the sword of Sargeras, which were corrupting the world-soul.[6]

By the time of the War of the Thorns, the Horde considered Silithus to be firmly in their hands.[7] It seems that only goblins were present however.[8] Magni Bronzebeard, alongside the Cenarion Circle and the Earthen Ring, set up a camp near the Wound.

The Chamber of Heart deep beneath the surface later serves as a base of operations for the Champions of Azeroth, where the future wielder of the

[Heart of Azeroth] will help Magni Bronzebeard. Along with his Titanforged, dragon and mortal allies, they inflict retribution to anyone exploiting Azerite sources (except their own allies), eventually planning to destroy the last Old God, N'Zoth. 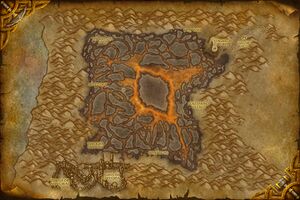 Map of Silithus after The Wound.

Several quest chains play out in the wound.

Players were first sent to the wound upon defeating Argus the Unmaker in Antorus, the Burning Throne in Patch 7.3.5. The breadcrumb and artifact sacrifice quests were removed with Patch 8.0, but the bulk of the chain is still completable:

After the launch of Battle for Azeroth, players acquire the

[Heart of Azeroth] from Azeroth herself as part of the Battle for Azeroth intro experience: