The Silithus Field Duty quest collection was added in patch 1.9 to the Silithus area. They were designed to provide casual players with the ability to achieve raid-level rewards, and require the character be a minimum of level 60. 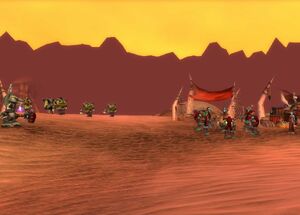 The basic format of the Silithus Field Duty quests involves completing a boss encounter with the help of several NPCs. After this boss is defeated, you are offered a choice of combat, tactical, or logistic assignments. When you complete your assignments, you are rewarded with a relevant badge. You can save these badges and turn them in for various items or given to Windcaller Kaldon in Cenarion Hold for a reputation bonus.

The Silithus Field Duty quest chain is only available after your realm completes the Gates of Ahn'Qiraj opening event and the outdoor war across Kalimdor officially ends (there is a server-wide announcement saying the qiraji armies are retreating).

The quest line begins at Windcaller Kaldon in Cenarion Hold. He gives you

[Unsigned Field Duty Papers], which you use (right-click) to create

[Prepared Field Duty Papers] (3-min cooldown). You must then take the papers to be signed by Captain Blackanvil (Alliance) or Krug Skullsplit (Horde). They will sign your papers after helping the NPCs defeat a boss mob (detailed below). Turning in

[Signed Field Duty Papers] back to Windcaller Kaldon will give Cenarion Circle reputation and your choice of a Logistics, Combat, or Tactical assignment (detailed further below).

The Alliance Ironforge Brigade is camped just northeast of Hive'Zora and the Horde Orgrimmar Legion is camped northwest of Hive'Regal. Begin the event by talking to Janela Stouthammer or Krug Skullsplit. A large Silithid enemy will attack the camp, and you must aid the NPCs to defeat it. 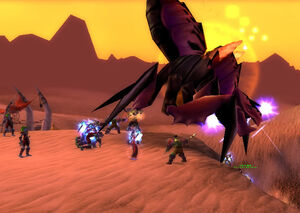 The Horde battling the Hive'Regal Hunter-Killer

For the Horde, the NPC is an elite 60 Hive'Regal Hunter-Killer.

Krug Skullsplit must survive the fight, or the quest can't be completed. There are several ways to do this: Help DPS or fear the Hive'Regal Hunter-Killer, or help to heal Krug Skullsplit. 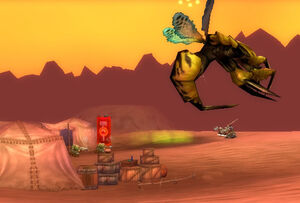 For the Alliance, the NPC is an elite 60 Hive'Zora Abomination.

If there is no player interaction, NPCs defeat the Abomination, but there is a high chance Captain Blackanvil will be slain, thus preventing players from completing their quest.

[Mark of Cenarius] or a

[Mark of Remulos], which are required for the epic rewards. These quests are obtained randomly when selecting Tactical or Logistics quests.

After receiving your assignment, you can retake the Field Duty quest and return to camp and fight the elite again to retrieve another assignment. You might get duplicates since you get a random quest. You cannot have more than 1 copy of a particular assignment in your possession at any time, but can have as many different assignments in your possession as your bags, bank, and quest log can hold. Also, you may have any number and variety of unopened letters which contain assignments in your bag. Some are less tedious then others and as it is more efficient to buy the materials for multiple assigments of the same type once you are near an auction house and as the field duty quest to get these assigments has been greatly nerfed it makes sense to defeat the elite bug many times and get a number of copies of assignments of the same type (technically "unopened letters" because of the restriction that there can only be one type of assignment in a bag - the letters can still be opened to see what assignment it contains). Half the quests can be attained directly from doing the Field Duty quest. However, the other half can only be attained by initially completing a quest received from Field Duty. These are follow-up quests, and are denoted as such below.

Collect these items. Some assignments differ for Alliance and Horde (noted).

Combat quests require killing 30 of some variant of Silithid bug. As of patch 2.3, all the hive bugs for the combat quests are no longer elite, making the quests much easier to solo. Out of the three types of quests, they take by far the longest time to complete, as all the bugs are typically strewn amidst other bugs. All bugs can also be found above ground, although some are more rare than others; it is worth your time to venture into the cave.

There are quests available for 4 out of the 5 bugs located at each hive. You will receive a dossier containing all four combat assignments for a single hive. You do not receive a follow-up for combat quests because you receive 4 quests in one Field Duty run.

The difficulty of each bug varies considerably; check the links below for more information regarding strategies for each species. Hive'Ashi and Hive'Regal have stealthed bugs that can make these quests much more difficult.

Tactical quests involve aboveground operations against the Twilight's Hammer and their elemental masters, or retrieving a report from a scout deep inside a hive. Object of Beckoning can greatly speed up completion of quests 1-5 by allow the player to select which element type he summons; however these are expensive and are usually a waste of valuable Encrypted Twilight Texts.

The various badges can be saved up and turned in for various items. The quests require several of each badge type and a certain level of Cenarion Circle reputation. All four quests are immediately available, can be completed in any order and are repeatable.

If you do not want any of these item rewards, but instead are trying to gain Cenarion Circle reputation, you may also turn in the badges to Windcaller Kaldon for the

[60] Allegiance to Cenarion Circle quest. This requires one of each type of badge and results in 1000 reputation.

As of Patch 2.3, Morna has only 2 Twilight Marauders.