From Wowpedia
(Redirected from Silkworm)
Jump to: navigation, search 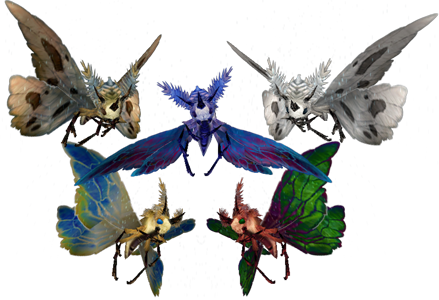 Moths are flying insect beasts with powdery wings that can be found on Azeroth, Outland/Draenor, and Argus.

Blue Moths are delicate denizens of Azuremyst Isle who are rumored to have healing abilities.[1] A product of exposure to wild magical energies, the Red Moth is the unexpectedly colorful result of Azerothian moth species being released into the eco-domes of the Netherstorm.[2] Jinyu assassins employ the Ashwing Moth as both a portable decoy and a light source to reveal weak spots in their enemy's armor.[3] The curious Skywisp Moth is sometimes found interrupting the spells of a wandering mage or warlock.[4] 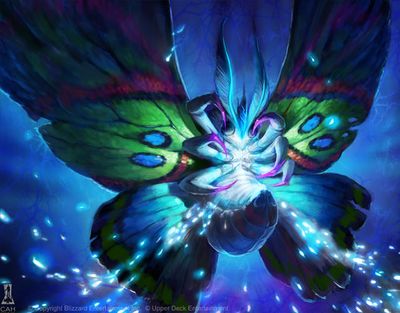 Mothra from the TCG.

These are usually peaceful, unless they are provoked. Though large in size, one of their defenses is the ability to emit some type of chemical that pacifies aggressors. Enemies are unable to attack for a short time.[5]

Moths are some of the most common types of wild battle pets found around the world.

[Serenity Dust]. Draenei hunters will start with a Moth as a pet.

Silkworms are the first stage in a moth's life.[6] After being fed they produce some raw silk.[7] Prized for their ability to spin cocoons of silk, in the wild, to the untrained eye, they can be difficult to discern.[8]