For other covenants, see Covenant (disambiguation).

The Silver Covenant is a militant faction of high elves led by Vereesa Windrunner. They reject the admission of blood elves into the Kirin Tor and have taken it upon themselves to serve as a military deterrent for any potential Horde uprising. During the war against the Lich King, they joined the Alliance Vanguard, along with the Explorers' League and the main host of the Valiance Expedition, in Northrend. They employ hippogryphs as well.

The Horde equivalent of the Silver Covenant are the Sunreavers.

The Silver Covenant was created by Vereesa Windrunner as a precaution against possible treachery from the Sunreavers.[1]

The Covenant controls the Alliance-exclusive district of the Silver Enclave in the city of Dalaran. The guards they employ are Silver Covenant guardian mages, who expel Horde players once they get too close to the Enclave's outer walls.

They represented the Alliance in the Argent Tournament. Later the champions of the Silver Covenant helped fight the forces of the scourge in the Frozen Halls and its Sunreaver counterpart in Dalaran, to restore the magical blade Quel'Delar from its defiled state by the Blood-Queen Lana'thel.

In the wake of the Cataclysm, the Silver Covenant is invited by the Ranger-General of Silvermoon, Halduron Brightwing, to join forces with Vol'jin of the Darkspear tribe against the budding Amani empire within the city of Zul'Aman.

[Divine Bell] by using Dalaran portals to infiltrate Darnassus, Jaina mobilized the Alliance forces and the Silver Covenant to purge the Horde from Dalaran. While Jaina rounded up the Sunreavers who surrendered peacefully, Vereesa sends Alliance agents to prevent the Sunreavers from escaping and neutralize any Horde insurrections or Sunreaver sympathizers who were aiding and abetting their resistance to incarceration. The Silver Covenant is dispatched into the sewers, where they round up several bewildered Sunreaver citizens. Soon after, the Covenant comes under attack by Grand Magister Rommath, whose assault on the city includes undoing much of the Silver Covenant's attacks underground, in Krasus' Landing, and in the (now Alliance-controlled) Sunreaver's Sanctuary.

The Silver Covenant is later seen supporting Jaina Proudmoore's Kirin Tor Offensive as they vie for control over the Isle of Thunder.

Vereesa leads the Silver Covenant to Trueshot Lodge, pledging their aid to the new leader of the Unseen Path following their inauguration.

Later, the Silver Covenant, together with the Sentinels and the Quel'Thalassian force, participated in the Nightfallen rebellion.

During the Scourge resurgence, the Silver Covenant is seen defending their pavilion at the Argent Tournament Grounds in Icecrown.

Vereesa Windrunner, leader of the Silver Covenant, wearing the

A militant core of high elves that rejects the admission of blood elves into the Kirin Tor. They've united under the banner of Vereesa Windrunner and joined the Alliance forces in Northrend.

Before patch 3.1, there was no way to gain reputation with the Silver Covenant. However, as they are the Alliance's host of the Argent Tournament, reputation can be gained through many quests. Another way of gaining reputation with them is spillover from the Alliance Vanguard and its associated factions (usually by running heroics without a tabard). You will get an average of 7 rep per mob and 125 per boss. 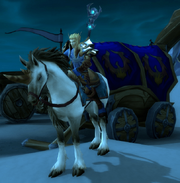 Patch 3.1 introduces daily quests with which players can gather reputation for the Silver Covenant.

After becoming a Champion, the following champion quests will also reward rep as well:

The following items can be purchased from