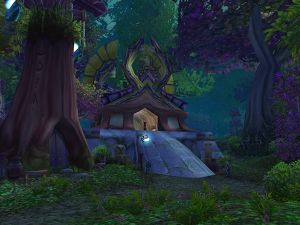 Silverwing Outpost is located in south-central Ashenvale, north of the border with the Barrens and southwest of Splintertree Post. It is the eastern Alliance bastion of defense against the Horde, and it is located on the Horde side of the Falfarren River. Because of this, the sentinels posted there have to fight back constant attacks from the nearby orcs, who are unrelenting in their goal of ridding the woods of the Silverwings once and for all. Its leader is Duriel Moonfire.[1]

After the Cataclysm, Garrosh Hellscream led the Horde in besieging the outpost. With the outpost's fortifications falling to his tactics, his army was able to assault the Silverwing Sentinels and drive away any who survived the assault. After the battle for Ashenvale, in which Garrosh and the Horde were driven back, the outpost was retaken and rebuilt.[2]

During the War of the Thorns, the outpost was once again attacked by the Horde.[3]