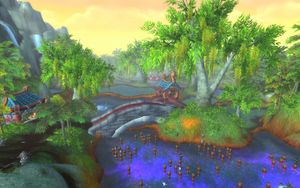 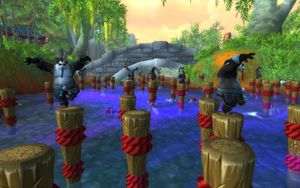 The Singing Pools are a series of magical pools in the east on the Wandering Isle. The spirits of animals that have died in them have infused the water of five of the area's pools with shapeshifting magic, causing anyone that steps into the water to take the forms of those animals. In one of the deep pools, Fang-she guards an Ancient Clam, which holds the Sun Pearl. Rumor has it that Shu, the ancient water spirit, has a liking for such pearls.

Balance poles can be found in the western pools where Tushui Monks are found practicing. It's also said the reeds in the Singing Pools are the hardest in all the lands.[1]