“It is you who abandoned us, Maiev! You burdened me with everything in your absence!”

— Sira maligning Maiev during the Battle for Darkshore.

Sira Moonwarden is an important night elven warden. When Maiev Shadowsong went missing during the third invasion of the Burning Legion, she became the interim leader of the Wardens. During the Fourth War, she was killed by the Forsaken and raised as a Dark Warden in service of Sylvanas Windrunner. Apparently resenting Maiev deeply for what she perceived as her having abandoned them, saddling Sira with the burden of leadership, a perceived abandonment by Elune, and feeling the despair of death, she is now dedicated to killing her former leader and serving the Banshee Queen.

She was tasked by Sylvanas Windrunner with killing the loa death Bwonsamdi but ultimately failed, was captured by the Horde and then sent to the Alliance. She is currently a prisoner in the Stormwind Stockades.

Warden of the Kaldorei

At some point, Sira served as quartermaster of the Wardens and it was her duty to issue and train every single member in the use of the moonglaive. As a result, she could identify the wielder of any moonglaive by the weapon alone.[3]

Sira was present at the Molten Front in the Firelands, where she and the Shadow Wardens helped the adventurers against the minions of Ragnaros.[4] She later traveled to alternate Draenor and could be found at Starfall Outpost in Shadowmoon Valley and Yrel's Watch in Nagrand.

During the Burning Legion's third invasion, Sira became the interim leader of the Wardens[5] while Maiev was missing.[6] Sira herself was stationed on the Isle of the Watchers in Azsuna. She asked the Illidari for help to deal with enemies on the Isle[7] and in the Tidal Marsh.[8]

Some time after the War of the Thorns which resulted in the burning of Teldrassil by the Horde, Maiev, Sira, and Shandris Feathermoon spoke to Anduin Wrynn to try and convince him to assault Darkshore and retake it from the Horde, but with the war focused on Zandalar, Arathi, and Kul Tiras; Anduin did not have the troops to do so. As the three night elves spoke to Anduin, Tyrande went on ahead of the army to try and retake Darkshore herself.[9][10] Maiev, Shandris, Sira, and an adventurer located Tyrande's ruined ship at the Zoram Strand, which contained a book about the ancient ritual of the Night Warrior.[11] The Night Warrior was the incarnation of Elune's wrath. The ritual to become the avatar of the Night Warrior was extremely dangerous, and even witnessing it would put you in danger. Legend said that long ago, the Night Warrior was used by the night elves to carve out their empire. None who have attempted the ritual since then have survived, for Elune's raw power tore them apart. Upon journeying to Darkshore, Maiev tasked Sira with scouting the coast while she and Shandris went further inland. Sira expressed concern that Elune had not watched over the night elves during the War of the Thorns.[12]

Sira confronted and fought off a Horde adventurer, Nathanos Blightcaller and the Val'kyr that were aiming to raise Delaryn Summermoon, but was killed. Her last words were disbelief that Tyrande had not arrived to help her.[13] Very soon afterward Tyrande, empowered by the Night Warrior, did arrive and battle Nathanos, but despite Tyrande's efforts the Val'kyr succeeded in raising not only Delaryn but Sira as well. Sira accused Tyrande and Elune of abandoning her and declared that she was now a Dark Warden of the Forsaken. She left the battlefield with the Horde.[14]

Sira served as the Horde commander in the Battle for Darkshore, opposite Maiev. She accused Maiev of having abandoned the Wardens when Sira was left in charge. After Maiev led the Alliance to victory over the Horde,[15] Sira and other Horde forces were able to escape and/or flee the battlefield.

In contrast with other Banshee loyalists like Nathanos Blightcaller who stayed with Sylvanas Windrunner out of loyalty, Sira joined the Banshee Queen due to a desire for the succor of flesh and blood. She and Nathanos were ordered by Sylvanas with killing the troll loa of death himself, Bwonsamdi. To that end, they allied with the Widow's Bite, a group of Zandalari rebels led by a witch known as Apari. When a Zandalari patrol found them, Nathanos ordered her to bring the Banshee's Wail to a nearby coast.

In order to weaken the protections around Bwonsamdi's shrines, Nathanos was forced to hand over something precious and irreplaceable to the witch. Thus, after a moment, he handed his officer's badge given to him by Sylvanas when they were among the Farstriders many years ago and warned Apari that if she failed to destroy the loa's shrines as promised, then the consequences would be severe. After the witch departed to begin her work, Nathanos instructed Sira to remind him to drown her in the bogs of Nazmir after their mission was complete.

As the Widow's Bite and the Banshee loyalists fought side by side, they finally clashed with the Zandalari Empire in Nazmir, where they were discovered attempting to sacrifice children in order to weaken one of Bwonsamdi's shrines. In the end, this skirmish ended with the children saved, and Nathanos commanded his forces falling back. In the aftermath, Nathanos asked Sira if the theatrics with the children sated her bloodlust, causing her to wonder if he had a weak stomach. Nathanos was unmoved by the taught and reminded Sira that if the Zandalari were galvanized enough, they could pose a threat to their plans, especially if they acquired a few orc battalions.

In light of their alliance with the Widow's Bite, Sira revealed that Lelyias was a skilled healer who could help Apari with her leg injuries, however, the witch refused. This vexed Sira who noted that the Widow's Bite were loyal to Apari, that they would fall apart without her leaving the loyalists with no reinforcements, and more importantly, to Sira, was they needed the witch to survive until the loa Bwonsamdi was killed.

After arriving at loa's Necropolis, Nathanos prepared traps, anticipating that Bwonsamdi could receive reinforcements. Unbeknownst to Sira, Tayo, the lieutenant of the Widow's Bite, had grown increasingly disgusted with Apari's tactics, especially those against children. When Apari sought to harm another child in order to summon Bwonsamdi, Sira witnessed Tayo stopping Apari. After Tayo left, Apari let her go as she believed that Tayo would simply return. When Visrynn went to follow her, Nathanos called her off and told the dark ranger that they no longer needed her. When Bwonsamdi appeared, Nathanos gave the order to attack.

Unknown to Nathanos, his decision to ignore Tayo would prove costly as she defected to the Horde, with Thrall later noting that her aid proved instrumental in saving them from Blightcaller's traps. Though caught off guard by the Horde and Zandalari reinforcements, Sira was determined to fight on. When the side turned against them, Sira called out for aid, only to reel in shock when Nathanos abandoned her, and left her ranting about how she wouldn't be abandoned again. Her broken state of mind allowed Thrall to quickly knock her out and capture her. Soon Sira was transferred to Alliance custody as the beginning payment of what was owed by the Horde to the Tyrande Whisperwind.

Upon arriving in Stormwind, Mathias Shaw revealed what Thrall wanted of her to which King Anduin Wrynn agreed but first, he sought a word with her. Anduin demanded to know where Sylvanas was, and Sira declared that she was nowhere they could find her and that they had already lost. In response, Anduin attempted to use magic against her which made Sira laugh, declaring once more that they had already lost, and that Anduin would serve well. She was subsequently placed in the Stormwind Stockades and soon after visited by Tyrande, Shandris Feathermoon, and Maiev Shadowsong. When Tyrande mentioned that she saw Sira as a sad and defeated thing that had chosen a path, Sira grew outraged and declared that she hadn't chosen to return, would never choose to return, and how everything inside her is ugliness and rage, and the only thing that quiets the screams is death. She further declared that for what was done to her, she saw a hundredfold done upon this realm.

Maiev mentioned to Tyrande that she had lived a life consumed by vengeance and though there was no great love between them, she had no desire to see Tyrande become what she was. After Tyrande cut a shallow cut into Sira's neck, Shandris took her blade, and Maiev encouraged her to have mercy towards Sira, who Maiev saw as a sad defeated thing. Tyrande subsequently departed while Maiev and Shandris had more things to ask.[16] 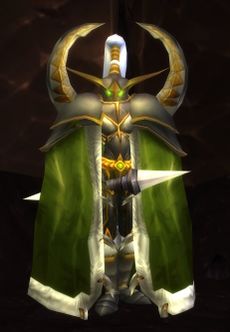 Sira speaks when the adventurer picks up or completes any world quest for the Wardens on the Broken Isles.

As a night elf

She may be related to Elder Moonwarden and Ithis Moonwarden.