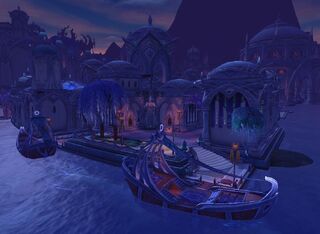 Siren's Vigil is a small district located in the southwest corner of the nightborne city of Suramar. It can be found on the city's lower levels, and borders two other residential districts in the form of the Evermoon Commons and Starcaller Retreat across the canals to the east and north respectively.

Siren's Vigil has significant access to Suramar Bay, which surrounds much of the district, and possesses two separate jetties for accommodating transport boats. The commune is also notable for housing a school for nightborne children, including a classroom and an outdoor playground.

The lack of strategic value and peripheral location of Siren's Vigil meant it received relatively little attention from either side when the civil war known as the Nightfallen rebellion erupted in Suramar City during the third invasion of the Burning Legion. Inhabited Suramar's lower classes, the vigil, along with neighboring districts, did serve as sources of support for the Nightfallen rebels against the tyrannical rule of Grand Magistrix Elisande.

As part of their attempt to suppress dissent, the regime began to cut off the vital arcwine supply to these districts. Following the continuing success of the insurrection, Elisande and Suramar's leaders resorted to even more extreme tactics. This culminated in a wholesale massacre orchestrated by demonic and Duskwatch forces on orders from the Grand Magistrix. As a result, a large amount of civilians were slaughtered throughout the Starcaller Retreat and Siren's Vigil, with the particular aim of wiping out the Nightfallen base at the Waning Crescent.[1]

In the aftermath of the attack, Siren's Vigil was heavily occupied by demons and nightborne security forces. The deaths of the residents of these districts ultimately worked against Elisande's cause, driving even more nightborne into the rebel camp, and eventually helping to topple her regime.