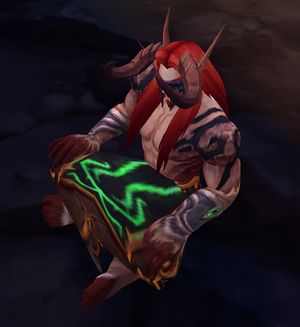 In the prisons of Black Rook Hold.

Sirius Ebonwing is a blood elf demon hunter who can be found in various places on Mardum during the demon hunter starting experience.

He later traveled with Cassiel Nightthorn, Asha Ravensong and Arduen Soulblade in pursuit of a dreadlord. While the group was scouting the area of Black Rook Hold, they were captured.

When the adventurer frees Sirius, it is already too late: The blood elf is consumed by the power of the fel energy pervading Black Rook Hold and goes mad, attacking the adventurer. This leaves no choice but to slay him.

Interaction
<The demon hunter looks as pale as a ghost. He shivers uncontrollably.>

Death
The demons control Black Rook Hold. You must... stop them...