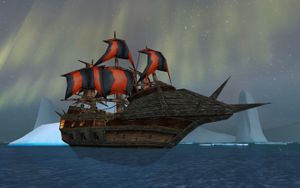 The Sister Mercy is a ghost ship found sailing just north of Scalawag Point in Howling Fjord. The crew was killed about a month prior to the adventurers' arrival, most likely by Sorlof, who is now holding treasure taken from the pirates. Cursed by

[The Shield of the Aesirites] these once Northsea Freebooters will not rest until they reclaim what is rightfully theirs.

Below deck the gunners have mutinied leaving the rest of the crew forced to deal with them and Sorlof. This is where the adventurer helps, by getting the blasting powder from the gunners to use on The Big Gun to kill the giant and bring back the treasure to the captain so that they might finally rest in peace.