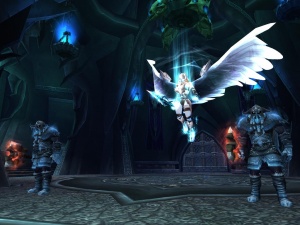 Sister Svalna can be found in Frostwing Halls of Icecrown Citadel, where she guards the way to where Valithria Dreamwalker is kept imprisoned. She appears to be a former acquaintance of Crok Scourgebane from when he was in service to the Scourge. While fighting through the enemies leading up to her, adventurers are aided by the Argent Crusade captains Arnath, Brandon, Grondel, and Rupert. Sister Svalna will throw her spear at one of these four at random, instantly killing him. Taking too long in clearing the trash will result in a second and possibly third spear throw (in addition to a higher chance that the captains will die through sheer damage). When the battle against Svalna herself begins, she will resurrect two of the slain captains as Scourge to aid her in combat.

Svalna gives 450 reputation with the Ashen Verdict when killed. Prior to patch 4.0.1, she also dropped 1

Intro
Crok Scourgebane yells: Ready your arms, my Argent Brothers. The Vrykul will protect the Frost Queen with their lives.
Captain Arnath yells: Even dying here beats spending another day collecting reagents for that madman, Finklestein.
Crok Scourgebane yells: Enough idle banter! Our champions have arrived - support them as we push our way through the hall!
Sister Svalna yells: You may have once fought beside me, Crok, but now you are nothing more than a traitor. Come, your second death approaches!

Resurrecting Slain Crusaders
Foolish Crok, you brought my reinforcements with you! Arise Argent Champions and serve the Lich King in death!

Aggro
Come Scourgebane, I'll show the Lich King which one of us is truly worthy of the title, champion!

Killing a captain
What? They died so easily? No matter.

Killing a player
What a pitiful choice of an ally Crok.

Death
Perhaps... you were right... Crok.

Unused quotes
You must not approach the frost queen! Quickly, stop them!