From Wowpedia
(Redirected from Skar'this the Summoner)
Jump to: navigation, search 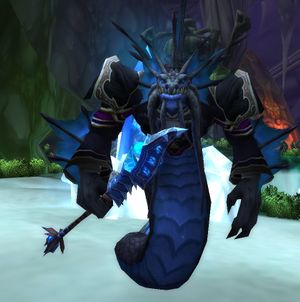 Skar'this is a naga and a servant of Neptulon appearing in the Slave Pens.

He usually appears as Skar'this the Heretic, a friendly naga quest giver. He can be found in a cage shortly before Rokmar the Crackler.

He also appears during the Midsummer Fire Festival as Skar'this the Summoner, a hostile mob this time. As adventurers show up, he can be seen using an Ice Stone to summon Lord Ahune. He drops no particular loot, and enjoys to repeatedly cast

Gossip as a prisoner

They fear my words. They make an example out of me. A mockery of the one true god, Neptulon.

Retribution comesss, mortal. The glorious hand of the Tidehunter will one day sweep through the non-believers like a scythe against a new harvest.

Aggro during the Midsummer Fire Festival