Skardyn are the cursed descendants of Dark Iron dwarves who had survived the Dark Iron siege of Grim Batol, near the end of the War of the Three Hammers (less than 230 years before the First War).[1]

More animal than sentient being but not without cunning,[4] they are described as being close in shape to a dwarf, but with clawed, paw-like hands, covered in black, coarse, scales on their bodies (even where there should be a beard), and a double-forked tongue. Their bodies are slightly shorter than the average dwarf, but have slightly extra width made up of muscle, from digging through earth with their bare hands.[5] Their hands allow them to run as quadrupeds, and even scale cave walls and ceilings like spiders.[6] Despite their stocky shape, they can move with far more swiftness than one would assume.[4] Even when disarmed, they can fight with tooth and claw.[5] A mouth full of sharp, reptilian teeth is used to devour any kind of meat they come across, no matter what state it's in; this causes them to have foul breath and a bite that can make a victim ill.[7] Their eyes are red, much like modern Dark Irons, described as molten earth, blood red, and crimson.[8][9][10] They tend to hiss, will howl when hunting, and their laughter sounds like someone choking on something.[10][11] The skardyn will use their sense of smell to examine their surroundings, such as the earth, air, and what life there is around them when hunting (and presumably tracking).[4] While there are male and female skardyn, even dwarves cannot tell the difference between the two genders.[12]

The skardyn tend to wear ragged, brown hooded garments with armor, and use belts.[2][8] They still use the markings of the Dark Iron clan on their garments, which decisively identified their origins.[9] In terms of weapons, they have daggers on their belts, use axes with the same style from the War of the Three Hammers, and palm-sized, spiked balls made of metal, which are either tossed by hand or thrown using slings.[5] They also favor pikes and whips along with the axes.[13] As the War occurred a few decades before the dwarven discovery of gunpowder,[1] the skardyn also use the dwyar'hun (literally "star bow" from the older dwarven dialect), a long-range weapon akin to a tiny crossbow. It fires a tiny spiked ball carved from stone, with the spikes being at least two inches long (the "star" of the bow). So long ago that the weapon has been abandoned, modern dwarves would not recognize it unless having seen or read about it in the historical records.[14]

Skardyn have carried down the love of the pipe from their ancestors. Instead of the carved wooden pipes of the dwarves, they use curled pipes crafted from clay. What they fill them with is a mystery, as the only known substance that dead skardyn have been found with for smoking smells like old grass and mulched earth worms, something even the hardiest of dwarves would rather not experiment with.[15] They also at least know of the ritual of Gwyarbrawden and the legends tied to it; whether they practice it is unknown.[10] The skardyn speak an unknown language or dialect, but will sometimes speak Dwarven (even if it is spoken in a manner more like Low Common).[9][16] They consider dwarves from the Bronzebeard clan good eating.[4] 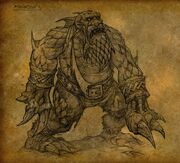 Cataclysm concept art of a skardyn.