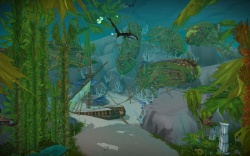 The Skeletal Reef is a reef with several sunken ships scatter the grounds in eastern Kelp'thar Forest.[58, 48] 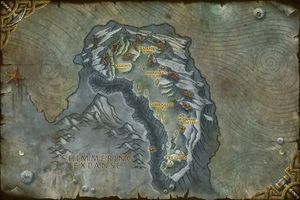 The area contains a cursed treasure that when touched will turn them into skeletons. Several pirates and even schools of fish have become cursed. Should they leave the reef, they would be forever cursed, however King Gurboggle holds the secret to removing the hex.[1]

Here many sharks roam the feeding ground including the great white beast Gnaws, whose favorite food are the nearby sea grubs.