From Wowpedia
(Redirected from Skeletal Warrior)
Jump to: navigation, search 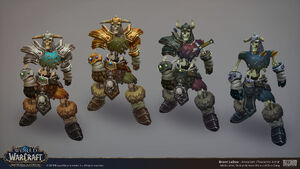 Skeletal warriors (or skeleton warriors) can be found in two versions: those who are under the command of the Scourge and those who are independent undead.

Called forth from the grave by the insidious necromancers, skeletal warriors are mindless slaves of the Lich King's powers. These lumbering fighters are highly resilient and tireless. When operating in great numbers, skeleton warriors serve as an invaluable part of the Scourge's combat force.[1]

Skeletal warriors are extremely dangerous undead minions, usually created independently through the force of unrequited will. Necromancers rarely command them, but occasionally ally with them if a skeletal warrior so chooses. These creatures are intelligent and vicious both on and off the battlefield. Skeletal warriors are created from the fallen bones of dead opponents. Skeletons can be created even without the assistance of necromancers, and thus skeletal warriors can be found even in parts of the world not controlled or challenged by Ner'zhul. They are cold, bloodthirsty creatures with a feral instinct for strategy and a cunning memory of their past that often gives them an advantage. These creatures understand and can follow orders, but are also capable of performing small tasks on their own — and are occasionally found far from their creator, carving out their own niche within a dungeon, tomb, or graveyard.

Skeletal warriors are tall, well-formed skeletons whose bones have a slightly silver sheen marking their unusual state. They are hardier than most others of their type and are far more capable in combat than normal skeletons. Wielding deadly weapons and equipped with heavy armor, they are a fairly difficult opponent for the inexperienced and are respected even among more mature troops. When many of them group together, they can be very dangerous and tenacious enemies — but this is not their natural condition and only occurs when a potent necromancer commands them. Some skeletal warriors retain all of their intelligence and memories from before their undead nature, but those qualities are now only a source of rage and violence, with all traces of love or gentle emotions eradicated from the skeletal warrior's mind. They are savage, cunning, and delight in destruction and chaos. Death comes later — for now, there is only revenge.[2]