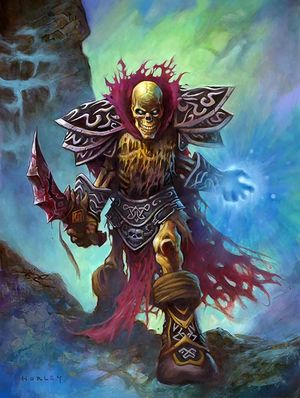 Turov the Risen, a skeletal mage in the TCG.

Skeletal mages are spell-casting skeletons, most of them minions of the Scourge, predominantly found in the Plaguelands and Northrend.

In Warcraft III they can be summoned by the Necromancer.[1]

These powerful skeletal sorcerers are extremely dangerous undead, usually created independently through force of unrequited will. Skeletal mages are never commanded by necromancers, but occasionally ally with them — or use necromancers as slaves to their will. These sorcerers were often once necromancers themselves and have now ascended a single step further into the undead realm, aligning their bodies and souls with the evil forces beyond. When they have truly mastered these forces, they may ascend into lichdom, but for now they content themselves with physical power and cruel ascendancy.

Skeletal mages retain just enough of their skin to cover their bone form in a tight-fitting, leathery sheath that both accentuates their skeletal condition and forms a gruesome shield for their bones against natural weaponry. Their skin is silvery, translucent in some places, and they may appear from a distance to be glistening skeleton warriors. They are usually surrounded by a small group of necromancer acolytes who perform a skeletal mage's bidding and serve as apprentices to this powerful mage. Skeletal mages not only retain all of their intelligence and memories from before their undead transformation, but they also have an intimate connection with the minds and senses of all undead under their command. Therefore, they often know things that their undead minions have discovered, even if that minion was not intelligent enough to make sense of its findings.[2]

"Skeletal mage" is an acquired template in the Warcraft RPG.