For lore about skeletons, see Skeleton.

"Them not good like Necrolyte skeletons. These try catch you and stick their fingers into your eyes and brain." — Unknown[1]

Uncontrolled spirits of the underworld sometimes roam the lands where their bodies were slain. Rotted cloth and flesh hangs from their bones as they seek revenge upon those who caused them to endure this eternal damnation. Held together by forces too dark for most to comprehend, they are more difficult to destroy than might be anticipated.[1]

These abominations are magical constructs made from the bones of the dead. They roam the forbidden lands and forgotten realms of Azeroth, seeking to take their anguish out on the living. They know only pain and death, and strive to embrace the living in their arms so they may drag them into the pits of hell.[2] 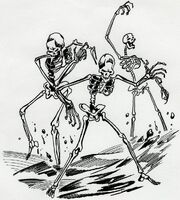 A Skeleton as seen in the Warcraft: Orcs & Humans Manual.

Skeletons are weak units found in the missions Medivh and Northshire Abbey as well as in some Custom Game dungeon maps.

The Skeletons encountered in the mentioned campaign missions have upgraded weapons and armor, improving their stats as shown in the unit box above.