For lore about skeletons, see Skeleton.

These unfortunate warriors gave their lives in battle only to be brought back into soulless servitude by arcane Orc magiks to fight for the Horde. Rising up from the battlefield, the Undead tirelessly hack and slash at their terrified enemies. These skeletal horrors retain none of the personality or emotions that permeated their living bodies and thus will do their master's bidding until they are destroyed. Only mortal creatures such as the Humans, Elves, Orcs, Trolls, and Ogres can be bound by these dark powers and be remade into the Undead.[1] 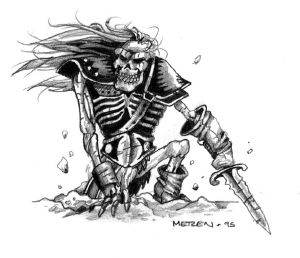 A Skeleton as seen in the Warcraft II: Tides of Darkness manual.