For the subzone from the main universe, see Skettis. 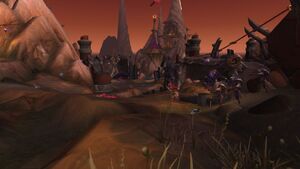 Skettis is a city of the Arakkoa Outcasts in the northern hills of the Spires of Arak, near the entrance to Talador, and stretches east all the way to the border of Shadowmoon Valley. It was built among Apexis ruins six hundred years before the opening of the Dark Portal[1] by the greatest king of the arakkoa and the first of the Arakkoa Outcasts, Terokk, alongside his Talonpriests and under guidance from Anzu himself. The city is under attack by the Adherents of Rukhmar, who seek to kill the scholar Reshad and the Talonpriests who uphold the legacy of Terokk.

Rumors persist of an ever-growing mass of swirling energy buried deep beneath Skettis, whispering promises of power to any who will listen...[2]

Skettis was the only region of the Spires of Arak to survive Draenor's destruction, though only the eastern end did so.

The whispering, growing mass of swirling energy beneath the city is likely connected to the Void.