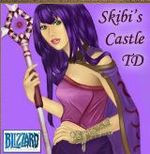 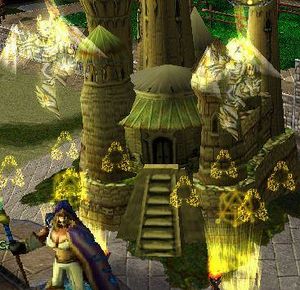 Skibi was a human defender of an Alliance castle in the official Blizzard scenario map for Warcraft III called Skibi's Castle TD. Even though she lived in a castle, she was probably not royalty because she is not mentioned in any other lore, the actual reason to this is that the map was not originally created by Blizzard, but Blizzard liked it so much they made it a standard map. Adventurers built defenses around her castle to defend it from the evil demonic invasion coming from Dark Portals which had opened around Skibi's castle. The Dark Portals were opened by an evil entity named Rydik.

Skibi's Castle TD is a teamplay-map. It is split in two halves. On the left half of the map is the first team and on the right half is the second team. On each half there are 2 ways leading to a castle in the center of the map. Each team can have up to 5 players, who can either create one or more mazes together as a team or scatter around those 2 paths to stop the incoming monsters, which are coming from both ways. The player's mazes consist completely of damaging towers. If monsters get all the way to the castle without getting killed, then the team they are coming from looses a life each mob.

Information about builders and how to never leak on Skibis Castle Perfection Guide.