From Wowpedia
(Redirected from Skrog)
Jump to: navigation, search 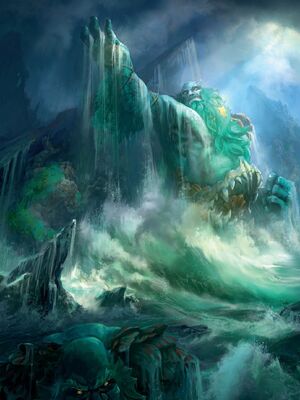 Sea giants, also called skrogs,[4] are aggressive, aquatic giants created by the titans to help them dredge out the seas and lift the land from the sea floor of Azeroth.[5] Few remain, and those that do are often hostile. The sea giants of Stranglethorn Vale are particularly malevolent: they are known for deliberately sinking ships[6] and stealing their loot.

A number of sea giants were located on Echo Isles. Rexxar killed them in order to evacuate the trolls.

The scientific community of Azeroth long pondered, often in taverns, what a baby sea giant looked like.[10] 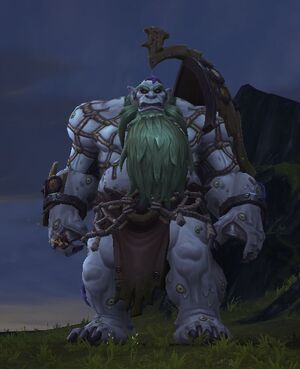 [Shell of Tide-Calling] has a chance to drop from 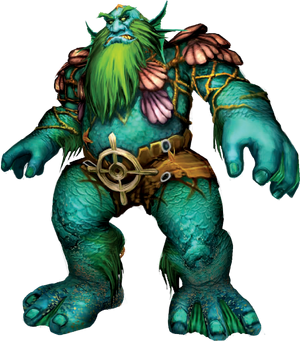 From the Monster Guide RPG book.

Titans created the sea giants to dredge the oceans and to serve as guardians of Azeroth's coastlines and oceans, and the fierce giants act as protectors of the waters even now. They keep a wary eye on ships and upon those who make their living on the ocean, such as fisherfolk. While not evil creatures, sea giants care nothing for the laws of land dwellers or the lives of the small beings that trespass in the waves. They tolerate no opposition — on the rare occasion when a sea giant issues a warning, he does so only once. Sea giants rarely interact with other races save to drive off trespassers or punish those who befoul the oceans. They live underwater but rise regularly to patrol their coastlines. Ancient and wise, sea giants nonetheless display a chaotic nature as unpredictable as the sea itself. Still, adventurers who tread carefully and speak convincingly may find a sea giant willing to trade information or secure safe passage in exchange for treasure or knowledge. Sea giants sometimes build underground settlements of coral and stone, though they rarely put much effort into such constructions. As guardians of the waves, they prefer to be able to pick up and leave at a moment's notice to chase rumors of defilers.[3] 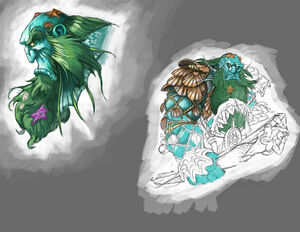 From the Manual of Monsters RPG book.

Sea giants are tasked to keep the oceans clean and safe. They seldom make their way to the surface world, instead preferring the isolation of the ocean bottom. They enjoy the worship of murlocs but are the constant enemy of the naga. Of late, sea giants have taken to hunting out these corrupters, which has brought the sea giants closer and closer to the surface world. They stand around 18 feet tall and weigh about 10,000 pounds. Nomadic creatures, sea giants do not maintain lairs like others of their kind. Instead, they drag their belongings and wealth along with them in huge sacks crafted from the sails of sunken ships. Their watery home does not allow them to keep many goods, so they favor metals that will survive the ocean depths.

Sea giants are not refined in their tactics. If on land, they will simply rush their target and try to stomp it out of existence. At sea, they will use their club or command of water to destroy their opponents. Once engaged in combat, they will fight to the death in their anger. Sea giants can hurl boulders, but they prefer close combat. A sea giant begins combat with a slam attack (using its Bash feat) against the nearest opponent; if surrounded, he chooses the target who seems the largest or strongest. He then switches to his heavy pick and attacks the next-nearest opponent. He uses his Power Attack and Reckless Attack feats to their fullest degrees, hoping to kill an enemy outright and then Cleave into the next; he generally positions himself near multiple foes, if possible, so that he can use his Great Cleave feat.[2][11]

Azeroth's sea giants venerate Golganneth and hold small ceremonies several times a year in his honor. These ceremonies involve the crafting and sounding of musical horns and the feeding of small fish.[12]