Gather 6 Searing Collars from the cultists in Skull Rock.

<name>. The Burning Blade has infested the cave east of Orgrimmar known as Skull Rock. Inside that cave they perform vile rituals, and burn their own flesh with Searing Collars.

By wearing these collars, I believe the cultists attune themselves to demonic power. But to confirm this, I must have a collection of the collars to study.

Go to Skull Rock and gather Searing Collars from the cultists you find there. Bring them to me, and I will uncover their secrets.

Have you yet entered Skull Rock, <name>? Do you have the Searing Collars?

Good. Hiding within these collars is the secret behind the Burning Blade. And I will uncover that secret... 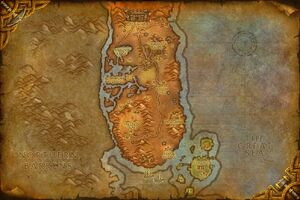 is a cave north of Margoz's position at the base of the mountains towards the coast. Enter the cave and kill Burning Blade cultists until you have collected enough Searing Collars.

The Burning Blade in the cavern have a high chance of inflicting Felblood. Gain 5 stacks of this and you will transform into a demon for 1 minute, granting you increased health regeneration and critical hit rate. Take advantage of this to help finish the quest.

When the quest is completed:

Margoz enters a trance...
Margoz is burned by unleashed magic!
Margoz says: Argh!
Margoz says: <Name>, unlocking the secret of these collars is beyond my skills...

This quest is followed by: Neeru Fireblade.