This article is about the history of the Skull. For the in-game trinket, see 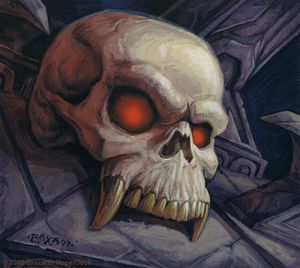 The Skull of Gul'dan.

The Skull of Gul'dan was a powerful demonic artifact created from the skull of the orc warlock Gul'dan. Used for a plethora of demonic activity, from opening portals to corrupting the northern forests of Ashenvale, its powers were finally consumed by Illidan Stormrage. Although already consumed by Illidan, the skull still holds power and is in Illidan's possession. 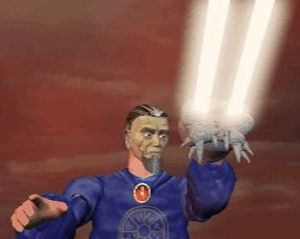 Khadgar uses the skull of Gul'dan to close the Dark Portal in Warcraft II.

Gul'dan was torn apart by demons in the Tomb of Sargeras. One of the surviving warlocks found Gul'dan's remains as he was escaping the temple. He believed that even dead they still held power and took the head with him. The warlock was later killed by a warrior, who was in turn killed by Hurkan Skullsplinter, the Bonechewer chieftain. Not realizing its power, Hurkan wore the skull as a symbol of his station before he was killed by Grom Hellscream.[1] Grom delivered the skull to Ner'zhul so he could use it to reopen the rift in the Dark Portal.[2]

After retrieving the Book of Medivh, the Eye of Dalaran, and the Jeweled Scepter of Sargeras from Azeroth, Ner'zhul no longer needed the skull to open new portals to other worlds. Deathwing demanded it as payment for his services for purposes unknown. Ner'zhul was reluctant to part with his trophy of triumph over his apprentice.[3]

The skull appeared to hold some shard of Gul'dan's soul within, enabling the dead warlock to communicate with Ner'zhul. Additionally, it is implied several times that the Skull has corrupting properties on its wielder as the voice of Gul'dan slowly tempts him over time.[4]

Khadgar, Alleria Windrunner, and Turalyon managed to claim the Skull of Gul'dan from Deathwing and find the Book of Medivh, which Ner'zhul had left behind when he escaped through a portal. Khadgar used both artifacts to close the Dark Portal. As it crumbled, he sent the artifacts back to Azeroth via gryphon rider, which ended up in the hands of the Kirin Tor.

Years later the skull was stolen from Dalaran by the dreadlord Tichondrius at the same time that Arthas Menethil and Kel'Thuzad claimed the Book of Medivh.[5]

The skull was used by the Burning Legion to corrupt the forests of Ashenvale and Felwood. The Skull also augmented the powers of Tichondrius. The skull's powers were eventually consumed by Illidan Stormrage who, upon absorbing its power, became half night elf and half demon. With his newfound power, he struck a major blow to the Legion by killing Tichondrius. Illidan retained memories of the Tomb of Sargeras from Gul'dan, which he used in tandem with his own knowledge of Suramar to find the Eye of Sargeras.

The skull of Gul'dan in Illidan's grasp.

When Illidan "consumed" the skull it was not destroyed, and Illidan kept it in his possession. The opening cinematic of the Burning Crusade features him holding the skull in his claws, and he can be seen in-game doing the same thing. The skull is now part of Illidan's loot table. 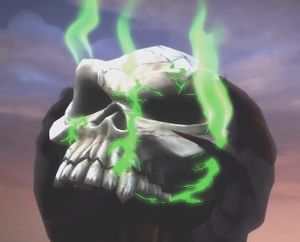 After the alternate universe Gul'dan is defeated at the Nighthold, the recently revived Illidan kills him by burning him from the inside out with fel until only Gul'dan's skull remains. Illidan then shatters the skull with his hand.

In Warcraft III: Reign of Chaos, consuming The Skull of Gul'dan doubled Illidan's base attack damage (from 34-56 to 75-123) and allowed him to deal chaos damage, which was fully effective against all types of armor (including the Divine Armor of Tichondrius). In addition, it metamorphosed Illidan in a powerful demon with a ranged attack. It also increased Illidan's strength, agility, and intelligence which resulted in his health points increasing by 300 and his mana points by 90.