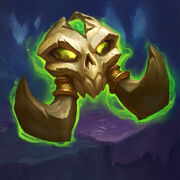 Skull of the Man'ari in Hearthstone.

The Skull of the Man'ari is one of the artifacts used by demonology warlocks in World of Warcraft: Legion. Equipping it will automatically place the

[Spine of Thal'kiel] in your main hand.

Before the eredar served the titan Sargeras, one of their greatest leaders, Thal'kiel, had unprecedented skill with summoning and binding magics. Driven by ambition, he reached into the Void and was answered with knowledge of dark creatures unlike any the eredar had seen before. Thal'kiel's apprentice, Archimonde, discovered his master's dark pact and revealed it to Thal'kiel's fellow rulers, who banded together to strike Thal'kiel down. After his defeat, they had his skull gilded and placed on display as a warning. Today the dreadlord Mephistroth uses it to enhance his ability to summon and command demon armies for the Legion.[1] 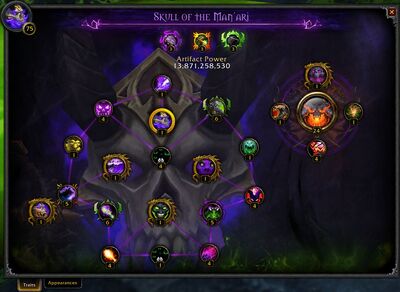 Upgraded: Gaze of the First Summoner

Valorous: Pride of the Pitlord

Challenging: Soul of the Forgotten

When equipped, certain places, characters and events can trigger Thal'kiel to say or whisper things to the player, similarly to

[Xal'atath, Blade of the Black Empire]. All of them are voice acted.

Ah, home... I almost missed it.
This city was once the greatest of Argus. Look at how it has fallen! The once-mighty houses are now mere pawns of the Legion. Soon, they will serve us as well.

Every time one of the six eredar heads is looted, in that order.

You know, I've been rather been missing having some skin on my bones. Maybe there's something we can do about that?
No. Lower caste. Won't do at all.
Not bad... not bad. Green eyes though? Mine were grey.
No no no... wrong skin color entirely. That won't do.
Ick, that head reminds me of an uppity apprentice I had. Get rid of it.
That's it! That's the one! Give it to me immediately.