From Wowpedia
(Redirected from Skybreaker)
Jump to: navigation, search 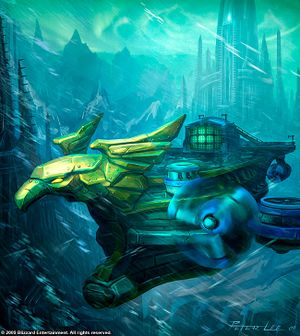 The Skybreaker as it appears in the TCG. 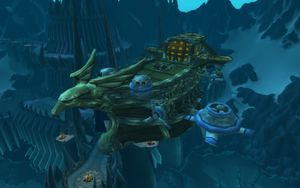 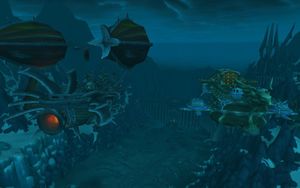 The Skybreaker in a gunnery duel with Orgrim's Hammer.

The Skybreaker is an Alliance gunship currently patrolling above Icecrown and serving as a mobile base of operations for the Alliance forces in the area.

A marvelous feat of gnomish and dwarven engineering, the Skybreaker is driven by numerous powerful propeller engines, armed with over twenty broadside cannons, defended by large battery guns in the front and rear, and crewed by a full complement of marines ready to fight at a moment's notice. A massive bomb resides in the lowest deck. A steel eagle head on the bow cuts through the sky as the vessel flies above the walls of the Lich King's fortress, providing valuable cover for Alliance forces on the glacier below. Numerous Alliance leaders, from the noble Vindicator Maraad to Thassarian, the first death knight to rejoin the Alliance, use the Skybreaker as a staging point for their forays deep into enemy territory. Under the able command of High Captain Justin Bartlett, the Skybreaker is the first line of attack for the Alliance war effort against the Lich King.

All is not quiet in the skies above Icecrown, however. The arrival of the Horde's new airship, Orgrim's Hammer, has sparked open hostilities. The two gunships often square off, focusing on the renewed hostilities between the factions instead of the threat of the Scourge. Only time will tell if the brave crew of the Skybreaker can stand up to the Horde's newest behemoth in addition to the ravenous undead of the Lich King's Scourge.

In the Halls of Reflection, the final wing of the Frozen Halls 5-mans, the Skybreaker comes to the rescue of Alliance players escaping the Lich King when they become trapped on a platform outside the Hidden Passage.

The Skybreaker, under the command of Muradin Bronzebeard, later becomes involved in a Gunship Battle with Orgrim's Hammer in Icecrown Citadel. Although it is the same gunship, it has been remodeled slightly for use in the raid; all below deck entrances have been covered up.

The Skybreaker is divided into three decks, interconnected by wooden stairways and ramps.

The main deck is also the largest, housing many of the vessel's offensive and defensive weapons. Mounted on both sides of the forecastle are twin battery turrets, providing an unparalleled amount of forward firepower. Along the deck stand numerous marines and High Elven sorcerers, ready to defend the ship from any unfriendly attacks at a moment's notice. At the rear of the main deck stands the massive aft-castle, containing the ship's bridge inside the brilliantly lit glass exterior.

The lower decks are lined with broadside facing cannons staffed by a literal army of dwarves and gnomes. Though smaller than the Orgrim's Hammer's monstrous turrets, the sheer number of guns makes the Skybreaker more than a threat to the other ship. A well stocked armory and a small launch platform for aerial missions are contained in the aft sections of the lower decks. In the bowels of the ship rests the ultimate weapon of the Alliance: a massive bomb larger than a drake, ready to be deployed upon the unsuspecting legions below.

Just as the Skybreaker is a "ship" of the air, it carries a compliment of two flying lifeboats. These "air dinghies" appear to be designed with flapping wings, so perhaps there is a motor of some sort under the deck. It's also possible they're meant to be set up and fixed horizontally, as glider wings. On the back is a boat-style rudder, but clearly for an aircraft design. They're not very big and seem to have only enough room for two people, maybe three. In an age of flying mounts and aircraft, perhaps they are truly only for emergencies, for those who do not have flight conveyance and cannot get a ride with those that do.