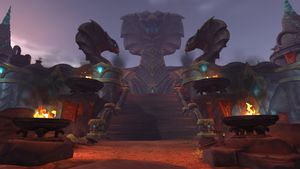 The stair leading up to Skycallers' Spire from the Thundering Terrace. 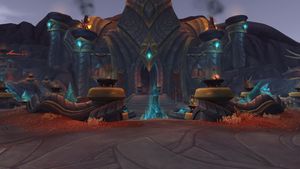 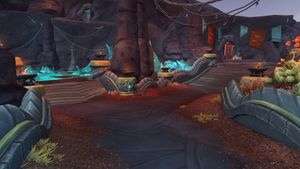 Skycallers' Spire is a massive structure nestled among the mountains of northern Vol'dun that serves as one of the main strongholds of the Faithless sethrak and hosts the entrance to the subterranean Temple of Sethraliss.[53, 26.5]

Without flying, the spire can only be accessed from the south by climbing a huge stair from the Thundering Terrace, which can in turn only be reached by traversing a large bridge spanning the ravine known as the Slithering Gulch.

The spire area itself consists of a vast, crystal-littered plaza where numerous Faithless congregate. This plaza extends into a separate eastern area roamed by sethrak skycallers, while heading west leads to an area known the Sacred Sands. Above everything looms a gargantuan spire in the shape of a hooded snake[1] that is periodically struck by lightning and can be seen even from many far-off corners of Vol'dun. The entrance to the Temple of Sethraliss lies at the base of this spire.

After wreaking havoc on the Faithless forces at the Crater of Conquerors and the Crackling Ridge, Vorrik and a Horde adventurer rode on Rakjan the Unbroken to rain destruction on the Faithless in the Slithering Gulch, before heading over to the Skycallers' Spire to confront the Faithless ruler, Emperor Korthek himself. The Faithless attempted to bar their way with a lightning barrier, but Vorrik dispelled it using his empowered staff, after which he and the adventurer landed on the spire plaza.[2] With the aid of Nisha and liberated vulpera slaves from the Crater of Conquerors, the adventurer created enough chaos around the spire to force Korthek to emerge from the Temple of Sethraliss and face the intruders. After a final battle, Vorrik, Nisha, and the adventurer slew Korthek, though not before he revealed that General Jakra'zet had already acquired the keystones to Atul'Aman.[3]

During the end of the Vol'dun storyline: