Not to be confused with Kragg or War Master Kragg. 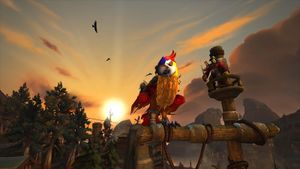 Skycap'n Kragg is the first boss in Freehold. He first appeared in Hearthstone.

Skycap'n Kragg and his faithful mount Sharkbait are the guardians of Freehold, continously[sic] patrolling the sky on the lookout for intruders. At least, that is what they're supposed to be doing. Instead, these two are often found snoozing in their crow's nest or dropping guano on unsuspecting victims from above.

Skycap'n Kragg charrrrrges into combat mounted on his giant parrot, Sharkbait. At 75% health Kragg will dismount and Sharkbait will take to the sky, raining Vile Bombardment.

Stage 2: Death Rains From Above

Skycap'n Kragg already attacks players as they make their way from the entrance of the instance to the boss encounter area, by throwing bombs and having Sharkbait defecate onto them. 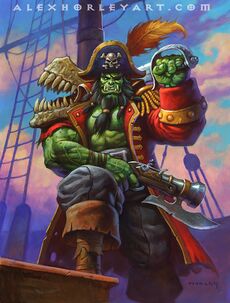 Before their canonical introduction in Battle for Azeroth, Skycap'n Kragg and his then-unnamed parrot mount were first introduced as a legendary card in the Grand Tournament expansion for Hearthstone. In Hearthstone, Kragg's mount is depicted wearing Horde armor, in contrast to World of Warcraft where Kragg and Sharkbait are instead members of the Irontide Raiders. Kragg's flavor text reads: "What's more boss than riding a parrot with a jawbone for a shoulderpad while wielding a giant hook-lance-thing and wearing a pirate hat? NOTHING."

Kragg reappears in the Galakrond's Awakening adventure for Descent of Dragons as Sky Gen'ral Kragg, who has the ability to summon Sharkbait as a token minion. His flavor text reads: "He's gunning for Sky Adm'ral."