For the subzone, see Skyhorn. 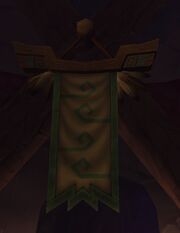 Banner of the Skyhorn tribe.

The Skyhorn tribe is one of the four tribes of the Highmountain tauren, led by Lasan Skyhorn. They are a proud people: their tribe sports some of the greatest pathfinders and hunters Azeroth has ever known.[1]

The Skyhorn are masters of the skies. Much like the Frostborn dwarves of the Storm Peaks, they ride on enormous eagles which allows them to reach areas that no other tauren can. This has also caused them to become more dominant than the Rivermane and Bloodtotem, which in turn has caused tension with the latter tribe.[2]

The Skyhorn's totem animal is an eagle. Their totem can be found outside the exit of the Path of Sky in Thunder Totem, implying that they represent the element of air.

The Skyhorn have recently been attacked by the harpies of the region, who have been emboldened by the theft of the

[Hammer of Khaz'goroth].[2] The harpy leader, High Crawliac, has recently taught her witches how to transform the noble eagles of the Skyhorn into vile rocs.[3] After the adventurer assists in killing High Crawliac and clearing out the harpies, Lasan journeys to Thunder Totem to once again declare his allegiance to the Highmountain Tribe.[4]

The Sepulcher of the Sky is the tribe's ancient,[5] sacred burial ground.[6]

Bron Skyhorn may be a distant relative.