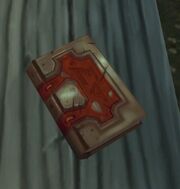 Slaghammer's Notes: Xal'atath, the Blade of the Black Empire is one of three books authored by Shadowlord Slaghammer found at the Twilight's Hammer camp in the Whispering Forest in the Tirisfal Glades.[13.9, 55.5]

It needs to be inspected for the first stage of

The Shadow Deacon was a cautious and calculating master, preferring the secrecy of the shadows to direct action. Ever since he found the Blade, his entire demeanor has changed. Arrogant, commanding, audacious. He now favors a bold plan to restore power to the Twilight's Hammer.

The Blade is called Xal'atath. It has come from an age before most of our races existed. We only have the scrawlings of previous holders to go from. While it is mostly ravings of those that lacked the will to wield the Blade, many of them say the same things.

They speak of the Black Empire, of a time when our true masters ruled all of Azeroth. Massive sacrifices, living buildings filled with void energies. Sometimes we can hear the Shadow Deacon speaking to... someone in his tent. He has mentioned the glory of the Black Empire as well.