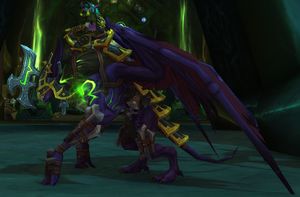 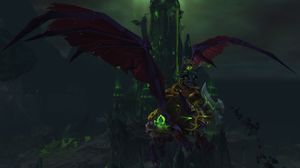 After the Illidari captured Mardum, they continue to use it as a breeding station. A part of Mardum is Felwing Ledge where felbats are raised by the Illidari for use against the Legion under Matron Mother Malevolence.

One day a rare specimen attacked the breeding ground of the Illidari. Under normal circumstances, Malevolence would simply kill the beast as it is too mature to be trained. However, she decided to give The Slayer a chance to tame it.

The Slayer fought tooth and nail, but Lixahl eventually ran away. Fortunately, it left a trail of blood behind. Using their

[Spectral Sight], The Slayer followed the beast to the edge of Felwing Ledge, even gliding through the heavens to get it.

Eventually, it is subdues and The Slayer gets a new mount.

This spell is a quest reward from

You broke it, you bought it.