For lore about slimes, see Ooze.

The Necrolyte clan believes that the strange slimes found in certain areas seek to eat the blood of the Orcs. No magiks could have created these crawling masses, but yet they exist. This slime seems attracted to the heat of Orcish bodies, and will seep through even the tightest armor to drain into the pores of its victims skin and sap them of strength and life.[1]

Not all of the putrid, slick goo that oozes from openings in the floors and walls is merely disgusting. Some of it poses great danger as well. While slime has no intelligence, it is attracted to the heat that bodies generate. This ichor will literally drain the life from its victims, as heat is what it uses as food. No magical properties have been found to exist within the slime, but nature is often a magik unto itself.[2] 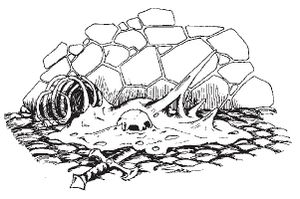 A Slime as seen in the Warcraft: Orcs & Humans Manual.

Slimes are found in the missions The Deadmines, Northshire Abbey and Medivh. They take a while to die, and in numbers, prove to be a real threat.