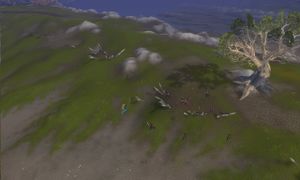 Slithering Cove is a subzone of the Twilight Highlands, located north of Dragonmaw Port at [71, 41]

. Naga (of Blackscale) warriors (Blackscale Raider) and sorcerers (Blackscale Mistress) ceaselessly erupt from the water to fight with Dragonmaw soldiers on the beach.

Apparently, this location was used by a paladin named Forscience on the server Neptulon (EU) to be the first person in the world to reach level 85 on an official server. He and his friends had been doing research on the beta servers for months prior to the official release, concluding that this was the best spot due to the rapid spawn of naga. Forscience managed to reach 85 in merely 5 hours and 30 minutes.[1][2][3]