For the debuff type, see snare. 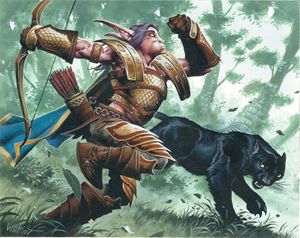 Slow is a level 36 Arcane mage spell that slows the enemy's movement speed by 50% for 15 seconds.

This is very powerful crowd control ability, and if used correctly, can save more lives than

Slow is dispelled as a magic type debuff.

This is useful against most melee classes in PvP. The snare is as effective as any frost-based snare, and the cast is instant, meaning it can be cast on the run to better escape.

The Mages of Lordaeron have been able to create a spell that hinders both movement and reflex. By warping the very patterns of time that surround his target, Slow enables the caster to bring an enemy's offensive to a crawl. Time cannot be held in check by even the mightiest of Mages, however, so the effects of this temporal shift cease as the power of the spell wanes.[2]

The Kirin Tor developed a technique that envelops a person in a field that reduces kinetic energy. This spell actually pulls the energy directly from the creature trying to move and attack, and channels it into the ground, causing the creature to have reduced attack and movement speed.[3]