For the town that once stood in this location, see Hillsbrad Fields.

The Sludge Fields is a Forsaken fortification built over the town of Hillsbrad Fields. It is an internment camp or prison where the captured humans of Lordaeron are sent for labor[2] to work on the Lordaeron's largest sludge and mushroom plantation.[3] It comprises of guard towers and searchlights, and there are also plague tanks present as well. Warden Stillwater resides and oversees here.

Before the town was taken, some of the former human residents of Hillsbrad Fields fled to escape the fighting. Many of the farmers and residents of Hillsbrad fled. Some attempted to venture east to Arathi Highlands. They never made it. Slaughtered before they reached Thoradin's Wall. Some traveled west into Silverpine Forest, to take refuge on Fenris Isle.[4]

Upon further investigation of the area, it is discovered that the Sludge Fields was built over Hillsbrad Fields after the Forsaken War Machine was able to conquer the area. The humans that stayed to defend the town and survived the onslaught were taken as prisoners of war and were forced by the Forsaken to work the fields under horrible conditions growing mushrooms to be used in toxins. Many human workers began to disappear over time and reports of ghouls moving about the camp began to circulate.

During the Legion Invasions, it was attacked by the demons but defended by adventurers.

During the Fourth War, untold numbers of undead were raised here and marched against Gilneas. Alliance champions were sent to an assault to crush Warden Stillwater's seat of power.[5] Horde champions encountered Darius Crowley at the Sludge Fields.[6] 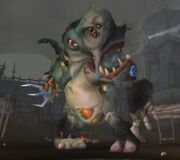 After completing the quest

[21] A Blight Upon the Land, Stillwater and his followers, having been killed, now appear on the ground dead along with his creations which have been dead since