Sludge beasts,[1] also known as sludge monsters,[2] are the oozes of Warcraft III.

These strange creatures share an elemental heritage but have been corrupted by the powers of chaos. Now they exist as tortured masses of semi-sapient goo. No one knows what their motivations are or if there is any specific ecology behind their existence.[1] They are noted to be native to Kalimdor.[1]

The following is a list of oozes that are called sludges, but it is unclear whether they are considered sludge beasts given the fact that no ooze in World of Warcraft has the tentancles of the sludge beasts. 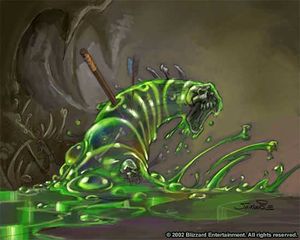 Sludges originate from the deep places of Azeroth. These strange creatures share an elemental heritage but have been corrupted by the powers of chaos. Now they exist as tortured masses of semi-sapient goo. No one knows where their motivations are or if there is any specific ecology behind their existence. They are most commonly found in Felwood.

Until recently, sludges were only encountered in uncivilized areas. Now, however, sightings of sludges are being reported in the cities of Kalimdor. They have been seeping up from the wet places of the cities, emerging from civilization's waste to strike unwary victims before sinking into the earth once more. Many strike from surprise that waste is allowed to gather or where stagnant water is allowed to loosen the earth. Whether this new aggression is part of some master plan of the Burning Legion or other force, the result of being driven from their traditional haunts by some more fearsome creature, a conscious decision on the part of the sludges or an accident is unknown. Sludge minions measure up to 8 feet in diameter while flingers and monstrosities reach up to 16 and 32 feet in diameter, respectively. Sludges attack any creatures they encounter.[3]

They have no perceptible shape. It looks like nothing more than a gigantic pile of animated muck. They lash out with pseudopods, attempting to dispatch prey for later digestion. It secretes an enzyme that slows the reflexes of the target. The sludge's entire body is a primitive sensory organ that can ascertain prey by scent and vibration within 60 feet.[3]